Businessman claims Covid-19 restrictions in breach of rights in Constitution 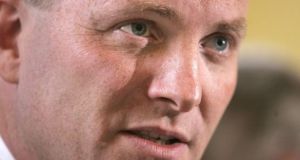 A challenge brought by businessman Declan Ganley over Covid-19 Level 5 restrictions on religious services has been adjourned at the High Court to early next month.

The Co Galway-based businessman, a practising Catholic, claims, as a result of the restrictions, he cannot leave his home to attend Mass in breach of the guarantee of the free practice of religion in the Constitution.

While certain religious activities, including weddings and funerals, are permitted, the restrictions prevent him and others attending Mass or similar religious services, he says.

Last November, he sought leave to bring judicial review proceedings against the Minister for Health, with Ireland and the Attorney General as notice parties.

The sides have since agreed the action can be dealt with via a “telescoped” hearing in which the leave application and full case are heard together.

When the matter was mentioned before Mr Justice Charles Meenan on Friday, Darren Lehane SC, for Mr Ganley, said his side were awaiting opposition papers from the respondents. Catherine Donnelly SC, for the respondents, said those papers would be filed later that day.

The judge listed the case for further mention on February 9th when it is expected a hearing date will be sought.

In his action, Mr Ganley, represented by Mr Lehane and Neil Steen SC wants an order quashing certain temporary regulations introduced by the Minster for Health to deal with the pandemic. He also seeks declarations that the regulations are incompatible with various articles of the Constitution, including Article 44 where the State acknowledges the right to the free practice of religion. Alternatively, he wants a declaration that the regulations do not prevent him leaving his residence for the purpose of practising his religion.

The vast majority of religious services, including Catholic masses, have been cancelled by church leaders due to the pandemic and, while the regulations did not appear to prevent services such as Mass, Catholic priests cannot leave their homes to perform a mass and nor can persons like Mr Ganley attend such services.

The case is very different to other challenges over Government measures in response to the Covid19 pandemic, counsel stressed.