Court to rule on Angela Kerins’s claims of PAC ‘witchhunt’

Decision in Rehab case has significant implications for all Oireachtas Committees 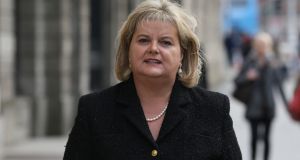 Angela Kerins Kerins, who resigned in 2014 as chief executive of Rehab, is claiming damages on grounds including alleged personal injury, loss of reputation and loss of career. Photograph: Collins Courts

A three judge High Court will rule next week on claims by Angela Kerins that the Dáil Public Accounts Committee had no jurisdiction for how it conducted public hearings over public monies paid to the Rehab group.

The court’s decision will determine whether the former Rehab chief executive can pursue a claim for damages against the PAC and State over two hearings before the committee in 2014 which she alleges amounted to a “witchhunt” against her.

The decision has significant implications for all Oireachtas Committees. It also has implications for the separate case by businessman Denis O’Brien over statements made by two TDs in the Dáil about his banking affairs. Judgment on that action has been reserved to an unspecified date after the Kerins decision.

The issues include whether the courts can intervene in relation to proceedings before a Dáil Committee or whether, as the PAC and State maintain, absolute privilege attaches to such proceedings with members of Committees accountable only to the Houses of the Oireachtas.

The PAC and State contend the “ouster” of the courts’ jurisdiction is clearly set out in Article 15 of the Constitution and that “ouster” applies irrespective of views as to the robustness, rigour, “and even rudeness” of proceedings before the PAC.

To find otherwise would severely undermine the democratic function of the PAC and other Oireachtas committees, they argue.

Other issues include whether the PAC was obliged to observe the requirements of constitutional justice in the conduct of the hearings related to Rehab.

In her proceedings, Ms Kerins claims the two hearings on February 27th and April 2014 amounted to an unlawful “witchhunt” against her outside the PAC’s jurisdiction.

She claims she was so overwhelmed by the conduct of the first hearing she later attempted to take her own life and was too unwell to attend the second hearing. Ms Kerins, who resigned in 2014 as chief executive of Rehab, is claiming damages on grounds including alleged personal injury, loss of reputation and loss of career.

In denying her claims, the PAC argued it had jurisdiction to conduct the hearings as it did and the courts cannot intervene. It is entitled to scrutinise how public funds are spent in a context including some €80m public monies are paid annually to Rehab companies, the Committee said.

In an affidavit, Mr McGuinness said Ms Kerins appeared voluntarily before the PAC and agreed to answer questions about her pay.

He said issues concerning her annual €240,000 base pay, plus an €18,000 car and €14,400 pension contribution, had been raised some time before the PAC hearings and attracted much public interest and comment. Rehab had itself confirmed taxpayers money was being used towards meeting the costs of Ms Kerins’ salary, he said.

Mr McGuinness rejected as “not plausible” that Ms Kerin’s appearance before the Committee could have caused the alleged ill-health and damage. Her job had significant pressures, there was intense interest in her salary before the PAC hearings and there must have been a prior underlying cause for her ill-health, he said.