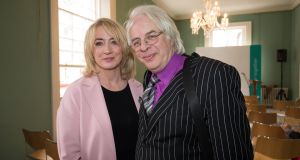 Paraphrasing the Mrs Doyle character from Father Ted, Keith Farry BL said that, in raising a potential tax issue, the fund was going “on and on and on” in another attempt to prevent the PIAs being approved. Above, Theresa Lowe and Frank McNamara. Photograph: Tom Honan for The Irish Times

The High Court hopes to make a final ruling within six weeks on an application for approval of personal insolvency arrangements (PIA) allowing musician Frank McNamara and his wife, barrister Theresa Lowe, deal with debts of €3.7 million.

He also said he was not prepared to allow matters to proceed any further until an affidavit addressing those issues was presented to the court.

Financial fund Tanager DAC, owed €2.26 million by the couple, is opposed to the proposed PIA.

The fund’s debt is secured against the couple’s family home in Dunshaughlin, Co Meath, valued at €550,000.

The matter was mentioned before the court several times after the August decision.

On Friday, Tanager, represented by Rudi Neuman Shanahan BL, voiced another concern about the proposed PIA.

Tanager wondered if there was a potential tax liability of €4,000, not included in the PIA, by Mr McNamara over a sum of money gifted to him by a third party.

Counsel said the possible tax liability arose from a sum of €28,000 gifted to Mrs Lowe and the money being moved from her account to Mr McNamara’s who, counsel said, then distributed funds to their four children.

Counsel described this as being like the famous quote from the Father Ted TV series: “The money was just resting in my account.”

Keith Farry BL, for the couple, said all issues raised by the court had been fully dealt with, everything had been done properly and approval for the PIA should be finalised.

Even if there was a tax liability due, that should not prevent the court approving the PIA, he argued.

Paraphrasing the Mrs Doyle character from Father Ted, he said that, in raising a potential tax issue, the fund was going “on and on and on” in another attempt to prevent the PIAs being approved.

Mr Justice McDonald said he needed time to consider the matter and would deliver a decision in the next five to six weeks on whether to approve the PIA.

The PIA would see the couple write off approximately €2.9 million of their debts and allow them keep their home.

In addition to the debt to Tanager, the couple owe money to parties including Bank of Ireland, Banco de Sabadell SA, and Revenue.

Mr McNamara (59) worked as musical director on the Late Late Show for 20 years while Ms Lowe (56) was a TV presenter before qualifying as a barrister.

Under the PIA, which will see the couple return to solvency, they will continue to make payments on their mortgage to Tanager from a total income of €5,600 per month.

The money will come from a €181,000 inheritance from Mr McNamara’s parents’ estate and the sale of five acres next to their home.

The judge had noted in his August judgment the creditors will do better under the PIA than bankruptcy.