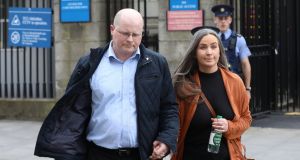 A couple have been freed from custody after they apologised before the High Court and purged their contempt over their failure to obey a High Court order to leave their home.

Linda Hussey Smith and her husband Gordon Smith walked free from the Four Courts after they agreed on Tuesday evening to comply with the court’s order to leave their home at Hamlet Avenue, Chieftain’s Way, Balbriggan, Co Dublin.

Earlier on Tuesday, Mr Justice Tony O’Connor ordered they be taken to Mountjoy Prison for contempt over their refusal to comply with the terms of an injunction granted last March to KBC Bank Ireland Plc.

KBC got the order directing them to leave their home on foot of a Circuit Court possession order obtained in 2016.

KBC went to execute the possession order in February but claimed its security staff were forced to leave after persons attacked them.

The bank then got a High Court injunction against the couple and anti-eviction activist Ben Gilroy, who it is claimed was seen on the property, requiring them vacate the dwelling by late March.

KBC said the couple did not leave and brought motions against Mr and Ms Smith alleging contempt. The couple, representing themselves, had opposed the application and asked that the injunction to be set aside.

The Smiths claimed they were physically assaulted in their home by “mercenaries” using illegal weapons and acting on behalf of KBC and feared for their safety. They also claimed the bank committed perjury in its application for the possession order.

Mr Smith also argued, under Article 40 of the Constitution, which affords certain protections on the family, any orders requiring the couple to leave the property were not valid.

In his ruling, Mr Justice O’Connor said the couple had refused, after being given a chance to obtain legal representation in the matter, to comply with the terms of the injunction.

During the hearing, the judge said comments allegedly posted on social media by Mr Gilroy about the case had been brought to his attention.

The remarks allegedly made by Mr Gilroy in between the period the couple were in the Bridewell and the time they returned to court included describing the judge as “a satanic cult member” who in his decision to jail the couple had made the Irish Constitution “redundant”.

Mr Gilroy had also allegedly said the judge “had vacated his oath of office” and that maybe people should “use the defence of the Dwelling Act” and “just wait for anyone coming through the door and blow their heads off with a gun”.

The judge said the alleged comments could amount to criminal contempt and he directed Mr Gilroy to attend before the court later this week in respect of them.