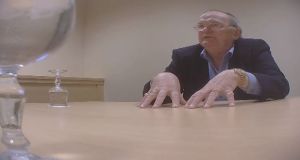 A county councillor faces a significant legal bill arising out of his failed High Court bid to halt an ethics inquiry into comments he made while being secretly filmed by an RTÉ’s Investigates programme.

At the High Court on Tuesday Mr Justice Garrett Simons ruled that Monaghan County Councillor Hugh McElvaney should pay the legal costs of proceedings the politician brought against the Standards in Public Office Commission (Sipo). The costs are estimated to be a five-figure sum.

The councillor is the subject of a Sipo investigation into whether he breached ethics when he was one of the subjects of an RTÉ programme, Standard in Public Office, aired in 2015.

In it, an undercover researcher, using the name “Nina Carlson” posed as a representative of a foreign investment firm looking for their support for a fictitious wind farm development.

Cllr McElvaney brought High Court judicial review proceedings claiming that Sipo, which held a preliminary inquiry into the matter, should be stopped from going any further.

In his judgement earlier this month, Mr Justice Garrett Simons, who heard the application over the course of two days, said he was satisfied “to dismiss the application in its entirety.”

That decision clears the way for the Sipo inquiry, which had been on hold pending the outcome of the High Court case, to proceed.

On Tuesday when the case returned before the court counsel for Cllr McElvaney Breffni Gordon Bl asked the court to use its discretion and make no order in regards as to who should pay the costs.

This was opposed by counsel for Sipo James Doherty SC who argued that the normal rule where costs follow the event, meaning that Cllr McElvaney should pay his client’s costs, should be applied.

In his ruling, Mr Justice Simons agreed with Mr Doherty and said that given that the proceedings had been dismissed in their entirety the normal rule in regards to who should pay the costs of the action should apply.

This was not a case where Cllr McElvaney had won a number of points raised in his action, the judge added, and he ordered the councillor pay the legal costs of the action.

Sipo’s investigation arose following a complaint made to the commission that the councillor had contravened provisions of the 2001 Local Government and the Code of Conduct for Councillors.

In his action, the former Fine Gael, now independent Cllr McElvaney argued that he was entrapped by the RTÉ reporter, who would not be available for cross-examination at the hearing of the investigation and that the inquiry was inadequate.

Sipo had opposed the application.

In a lengthy and detailed ruling, the judge said that the absence of the undercover reporter did not prejudice the statutory investigation being conducted by Sipo.

The judge said what the reporter said to Cllr McElvaney during the interview was not at issue as it was accepted what she had said was fictitious.

The court was not given any indication if Cllr McElvaney intends to appeal the judgement to the Court of Appeal.