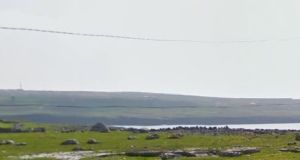 Clare County Council has secured a High Court injunction restraining the use of a new office at Doolin Harbour for the sale of ferry-ride tickets.

The order was granted by Mr Justice David Keane on Thursday who also placed a one-week stay on the injunction coming into effect to allow sea and coastal ferry-owners Dick Grant and his company, Sarahfenn Limited, and Liam O’Brien and his company, Baid Farantoireachta an Chosta Teoranta, to take various steps.

Clare County Council sought an injunction, which is to remain in place until the dispute has been resolved by the High Court, restraining ticket sales from the new cabin on the grounds that it had been erected without planning permission.

The respondents had opposed the action.

Giving judgment Mr Justice Keane said he was satisfied all the criteria for granting an injunction in favour of the council had been met. The judge allowed a one-week stay on the order. He adjourned the matter of costs to a date in the new legal term. The court heard the council will ultimately seek, at the full trial of the action, the removal of the cabin.

When the matter previously came before the court last week, James Connolly SC, counsel for Clare County Council, said the provision on the pier of an “unauthorised cabin structure” was a matter of great concern for the local authority which was protecting the public interest through the planning regulations.

Helen Quinn, a senior executive in Clare County Council’s planning, economic development and tourism department, said that Liam O’Brien and his company, like Mr Grant’s ferry company, engaged in sea and coastal water transport to and from Doolin Harbour.

There had been a history of enforcement action taken by the planning authority with respect to unauthorised developments undertaken by various rival ferry operators, the court heard.

Ms Quinn said that in May the cabin was erected in the harbour without the consent of the council and was being used as a commercial ticket sales office, advertisement structure and shop.

She told the court the move was symptomatic of the competition between rival ferry operators for the purpose of providing a second ticket office for one over others in a jockeying for trade.

Previously all traders had to share a single ticket sales facility. Dick Grant, through his solicitor, had claimed ownership of the cabin and claimed there was an historical legal agreement that meant it could remain on the pier.

Mr Grant, a director of Sarahfenn Limited which trades as Aran Island Fast Ferries, had argued the county council’s proceedings were aimed at stopping his company and Mr O’Brien selling tickets from the cabin.

The court had heard that there had been a structure on the pier for the past 20-25 years and the new cabin was simply a replacement for an existing structure. Mr Grant and his operations would be hit financially if they could not sell tickets for the remainder of the tourist season, it was claimed.