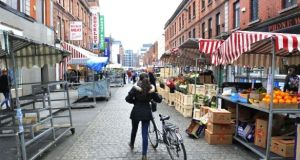 The Court of Appeal will hear a case next week aimed at reversing a decision that buildings on Moore Street are a 1916 battlefield. Photograph: Aidan Crawley

The Court of Appeal will next week hear the State’s appeal against a High Court declaration that various buildings and sites on and around Moore Street are a 1916 Rising battlefield site comprising a national monument.

Attorney General Seamus Woulfe SC is expected to appear as part of the State’s legal team seeking to overturn the findings made by Mr Justice Max Barrett.

The appeal will open next Tuesday before a three-judge appeal court and is listed to last three days.

The Court of Appeal was previously told the Minister for Arts and Heritage considered the matter urgent as the High Court decision raised issues concerning the interpretation of the national monuments legislation with potential implications for completing major infrastructural projects.

In his 399 page judgment delivered in March 2016, Mr Justice Barrett granted various orders and declarations to Colm Moore, a nominee of the 1916 Relatives Association, who brought the proceedings against the Minister for Arts and Heritage aimed at protecting the Moore Street site.

The judge granted orders preventing works to the buildings and locations at issue after declaring them to constitute a 1916 Rising battlefield site comprising a national monument.

He said the 1916 Rising is “unique” and the GPO occupies an “iconic” position in Irish history, making what happened to the men and women who fled the GPO after it was ablaze following shelling by British troops “a matter worthy of unique commemoration”.

The judge said the Minister could carry out essential conservation works to a terrace on Moore Street which was the final headquarters of the Rising leaders before their executions.

The Minister had disputed any such wider battlefield site exists and argued it was adequate to protect the terrace at Nos 14-17 Moore Street where it is intended to establish a 1916 Rising Commemorative Centre.

In July 2016, when dealing with preparatory issues for the appeal hearing, the Court of Appeal was told some of the buildings and sites involved had been sold by a development company, Chartered Land, to Dublin Central Limited Partnership, acting through its general partner Dublin Central GP Ltd, Grand Canal Square, Dublin.

Chartered Land was a notice party to the High Court case due to its having been granted, several years ago, planning permission for a major residential and commercial development in the area around Moore Street.