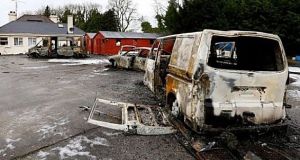 In 2018 the house was the scene of an attack on security men employed to secure it. They were forced from the property by a group of masked men and several vehicles were burned. File photograph: Brian Farrell

A High Court judge has said any person occupying a farm in Co Roscommon after 6pm on Sunday is likely to find themselves being jailed for contempt.

Ms Justice Leonie Reynolds made the remarks after being told that while three siblings have stayed away from their farm at Falsk, Strokestown, other persons are preventing KBC bank from repossessing the property.

The property is the subject of a repossession order obtained by KBC bank.

Last week Michael Anthony, David, and Geraldine McGann were brought before the court by gardaí to explain why they should not be jailed for contempt of orders to leave and not interfere with a bank’s possession of the property.

They were released from custody after giving sworn undertaking to leave, stay away from and remove their livestock from the farm.

When the matter returned before the court on Friday Rossa Fanning SC, for KBC, said while the McGanns have stayed away, his client remains unable to take possession of the property.

This was because at least one person, retired garda Kevin Taylor, is on the property and others may also be present.

Counsel said, earlier this week, Mr Taylor, of Dublin Road, Longford, informed KBCs agents who sought to secure the farm, he would not leave the property unless provided with a valid copy of the court’s order that the premises be vacated.

Mr Taylor acted in a threatening and aggressive manner towards KBC’s agents, counsel said. When the agent went to leave the property, Mr Taylor threw a copy of the court’s order at the agent, counsel said.

Counsel said that there were also posts on social media about the property, where groups and individuals were encouraging people to act in defiance of the court’s orders.

Some of the posts were critical of KBC, the judge and lawyers involved in the case, counsel added.

As a result of “a deliberate and contentious attempt to obstruct court orders” KBC was seeking an order for the attachment and committal to prison of any person found in occupation of the property.

The McGanns were not in court on Friday but the judge said she was satisfied that there was no evidence they had returned to the property. She said there appeared to be a deliberate breach of the order by other persons “who should know better” and she was prepared to hear an application to jail anyone who remained on the property.

The court did not want to send anybody to Mountjoy prison, but given the ongoing breach of an order, the court’s hands would be left with no alternative other than to jail persons, she said.

If the property is vacated by 6pm Sunday evening (November 1st) there would be no need to hear an application to jail persons in breach of the court’s order, she said.

The commentary on social media regarding the case was “utterly reprehensible”, she added.

KBC Bank obtained the possession order several years ago arising out of a €431,00 debt on the property from a loan to its registered owner Michael Anthony McGann.

They were evicted in 2018 but the house was later the scene of an attack on security men employed to secure it. The security men were forced from the property by a group of masked men and a number of vehicles were burned.

The McGanns, who were not involved in the incidents, returned to the house and the bank then sought to have them jailed for contempt of court orders by failing to vacate.

They were again ordered by the court to leave last March.

Due to the pandemic, KBC did not immediately return to court but last week the trio were brought before Ms Justice Reynolds to answer their alleged contempt.

The case will return before the court next week.