Environmental impact study should have been done on all 32km of project, says body 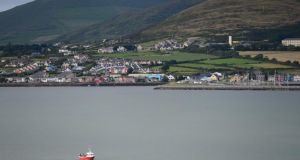 An Taisce is seeking orders quashing a November 2014 decision of An Bord Pleanála granting approval for a road improvement scheme from Dingle (above) to Annascaul and from Gortbreagoge to Camp Road. File photograph: Bryan O’Brien/The Irish Times

A challenge by An Taisce to planning approval for a controversial €65m road widening scheme on the N86 road between Tralee and Dingle is to be fast-tracked by the Commercial Court.

The case was admitted to the Commercial Court list by Mr Justice Brian Cregan on consent of both sides and is expected to be heard in July.

An Taisce is seeking orders quashing a November 2014 decision of An Bord Pleanála granting approval for the road improvement scheme, proposed by Kerry County Council, from Dingle to Annascaul and from Gortbreagoge to Camp Road.

The board had previously refused permission for the scheme but, after that decision was overturned by the High Court in 2013, the matter was sent back to the Board for reconsideration and it approved the scheme in November 2014.

In its challenge to the November 2014 decision, An Taisce claims the road project was not adequately assessed in accordance with the provisions of the Environmental Impact Assessment Directive.

Central to the case is a claim an environmental impact study should have been carried out on the full 32km stretch of the project. An Bord Pleanála had no information on the impact of the project on a 4.2km stretch of the road in terms of the habitat loss or on fauna, it is alleged. It is also claimed the hairpin bends are natural geological features.

The fast-tracking application comes after 700 people took part in a protest march in Dingle last weekend seeking that An Taisce withdraw its legal challenge. The 28km project between Dingle and Annascaul, which remains on hold pending the outcome of the case, would see a straightening and widening of the road and part of the scheme east of Annascaul has been completed.

In overturning the board’s earlier refusal to approve the scheme, Mr Justice Peter Charleton cited a failure by the board to consider the needs of cyclists and pedestrians.

Among the reasons the council advanced for the scheme was a plan to include a cycleway on each side of the road, plus a hard margin for maintenance and pedestrian use, the judge noted.

Upholding the council’s challenge to that refusal, Mr Justice Charleton said everyone agreeed the road badly needed upgrading but the board’s view was the road should not be so wide as to be obtrusive on the landscape. Cars were to be accommodated but cyclists were to share the road with other vehicles, the judge noted.

1 Covid-19: Taoiseach warns of restrictions in Ireland’s cities as hospital cases pass 100
2 Covid-19 cases higher in areas with large proportion of renters, CSO says
3 People asked not to cross Border as Donegal prepares for Level 3 restrictions
4 How Finland kept Covid in check and protected its economy
5 Aer Lingus staff say they are living in ‘near poverty’ and unable to cover rent
Real news has value SUBSCRIBE