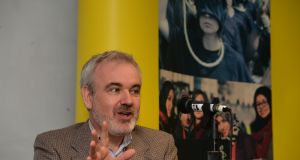 Colm O’Gorman, executive director of Amnesty International Ireland which has challenged an order by the Standards in Public Office Commission (Sipo) requiring it to return a €137,000 donation. File photograph: Alan Betson/The Irish Times.

Amnesty International’s Irish section has challenged an order by the Standards in Public Office Commission (Sipo) requiring it to return a €137,000 donation to its campaign to hold a referendum on the State’s abortion laws.

The donation was made in August 2015 by the Swiss-based Open Society Foundations (OSF), founded by billionaire George Soros, for the “My Body, My Rights” campaign, which involved organising events and seminars for politicians prior to the 2016 general election.

The objectives of the campaign included increasing political support for holding a referendum on the Eighth Amendment to the Constitution — Article 40.3.3 — and to provide a human rights compliant abortion framework. The amendment guarantees the unborn and mother an equal right to life.

Sipo last November directed Amnesty to return the donation after finding it was a donation for political purposes prohibited under Section 23A2 of the 1997 Electoral Act.

Amnesty denies the funds were used for political purposes and argues Sipo’s decision is flawed and should be set aside. Its Irish section has brought judicial review proceedings against Sipo, Ireland and the Attorney General.

It claims Sipo erred in law, acted in excess of its jurisdiction, misdirected itself as to the interpretation of electoral law, failed to give adequate reasons for its decision and acted irrationally and unreasonably.

Amnesty contends it should not have to repay the monies and that Sipo has breached its rights under the Constitution, the European Convention on Human Rights and EU law.

Brian Murray SC, for Amnesty, said the challenge raises many complex legal issues concerning interpretation of the Electoral Act. “Amnesty and other NGOs are extremely concerned about the implications of the decision.”

The purpose of the donation was to fund Amnesty’s 2016 campaign, the purposes off which included increasing public support for repealing the Eighth Amendment and collaborating with other groups working on access to safe and legal abortion. No referendum on the amendment was planned or had been called when the donation was made, counsel said.

Mr Murray said, after media reports on leaked documents from OSF in 2016 suggested the funding was part of a strategy to force the repeal of the Eighth Amendment, Sipo wrote to Amnesty referring to obligations under the Electoral Act.

Amnesty told Sipo the donation was not for political purposes but the commission said it had received information and confirmation from the foreign donor that the monies were for explicitly political purposes.

The foundation has disputed the suggestion it provided written confirmation that the donation was for political purposes and said Sipo seemed to be basing its decision on an internal document for discussion which was made public after computer hacking by Russians, counsel said.

Amnesty fears the matter could be referred to the Garda, leading to a possible criminal prosecution, if if does not return the monies, he said.

It also fears reputational damage and financial hardship as it does not have any significant reserves and the monies would have to reurned out of its budget for this year, counsel added.

Permission to bring the challenge was granted, on an ex-parte basis (one side only repesented), by Mr Justice Seamus Noonan, who returned it to April.