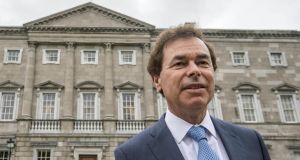 The former Minister for Justice Alan Shatter felt he had no alternative but to resign his position as Minister following the Seán Guerin’s report, the High Court has heard. Photograph: Brenda Fitzsimons

Former minister for justice Alan Shatter was left in an “untenable” position after publication of a report concerning his handling of complaints made by Garda whistleblower Maurice McCabe, the High Court has heard.

The disputed aspects of the report by barrister Seán Guerin include an alleged conclusion that Mr Shatter did not cause Sgt McCabe’s allegations to be investigated but rather accepted the Garda Commissioner’s response to the sergeant’s complaints without question.

When compiling that report, Mr Guerin failed to interview Mr Shatter or give him any opportunity to speak “or to have his voice heard at all”, Paul Sreenan SC, for Mr Shatter, said. There was no doubt Mr Guerin had power to interview persons and he interviewed Sgt McCabe for some 19 hours on four separate occasions, counsel said.

Mr Guerin, in his terms of reference, was mandated by the Government to look into Sgt McCabe’s allegations of wrongdoing and to report back to the Government whether there were matters of public concern justifying a commission of inquiry.

When the report was submitted to the Government, it made findings which, Mr Shatter argued, were regarded as findings of fact that impinged on his good name and arose from matters relating to how he was alleged to have performed or not performed his function as minister.

It was known in advance the report was to be published and it contained adverse conclusions concerning Mr Shatter which attracted severe criticism and the confidence of Taoiseach Enda Kenny was impacted, he added.

Media headlines described the report as “extremely damaging”, “highly critical” and “damning” of Mr Shatter, who felt he had no alternative but to do the “decent and ethical” thing and resign with serious adverse consequences for him, counsel said. He had reisgned on the day after the report was published.

The approach taken by Mr Guerin also meant there was no independent investigation of Sgt McCabe’s complaints, counsel also argued.

While there was a “mantra” in submissions on behalf of Mr Guerin this was a “scoping” report, the important thing was not its nature but what it said, the conclusions it drew and its impact on his client’s good name. Mr Shatter is “a real person with a real career, good name and reputation”.

Mr Shatter was given no notice Mr Guerin intended to examine and pass judgment on his actions as minister and Mr Guerin also completed his report without having seen documents he had sought from the Garda Síochána Ombudsman Commission, counsel argued. It seemed Mr Guerin felt he had to produce the report within eight weeks, he added.

Counsel was opening Mr Shatter’s judicial review proceedings aimed at quashing the disputed aspects of the Guerin report. The case is being heard by Mr Justice Seámus Noonan and is expected to run for three days.

In opposing the proceeedings, Mr Guerin says he was asked to carry out a “review” and in doing so, was not a court or tribunal, was not appointed to any office and held no statutory powers or functions. He was essentially asked by the Government, of which Mr Shatter was then a member, to conduct a review of matters in accordance with terms of reference.

That review effectively required him to express an expert professional opinion and he could not be sued by Mr Shatter, or made subject to judicial review, in his capacity as a private citizen, he said.

Mr Guerin said his report has no legal effect and was intended only to identify whether further measures, including establishment of a commission of investigation, might be warranted to address public concers arising from the allegations made by Sgt McCabe.

The Taoiseach had told the Dáil he was acutely conscious the scale of the public discussion around these matters could have implications for the administration of justice, he added.

Interviewing was not to be a routine part of the review and, aside from Sgt McCabe, was to be done only if necessary, he said. An integral part of the review included specific consideration of the appropriateness of the steps taken by any relevant public body, which necessarily included the Minister for Justice, appropriate care was taken and appropriate procedures were applied, he said.

Mr Shatter was provided with a copy of the report by the Taoiseach prior to publication and, while he raised two concerns about it, including that he had not been interviewed and Mr Guerin had not received documents from the Garda Síochána Ombudsman Commission, he took no steps to prevent the report being published in full, Mr Guerin said.

Mr Shatter secured leave last July to bring his proceedings aimed at quashing certain aspects of the Guerin report which he claims inflicted “severe and irreversible” damage on him in the political context and also caused him “severe reputational harm” as a public official and lawyer and “in the context of any position I may wish to take up in the future”.

Mr Shatter should have been given the opportunity to provide Mr Guerin with relevant information that would have assisted Mr Guerin in obtaining “a rigorously accurate understanding” of the events surrounding Sgt McCabe’s complaints and Mr Shatter’s approach to those, it is argued.