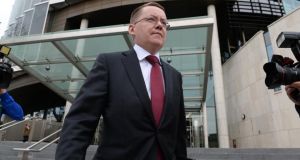 In the cast list of the Anglo trial, Robert Heron played an ambiguous role, regularly evoked but never seen.

Early on in the 11-week trial, a host of former Anglo Irish Bank directors, employees and clients recalled being told, as preparations were in train for the Maple transaction in July 2008, that positive legal advice had been received from Heron, a partner and corporate lawyer at the firm Matheson Ormsby Prentice. Many of them said this gave them comfort and reassurance before the deal went through.

Yet some of those witnesses had no direct dealings with Heron, and no documentary evidence was tabled to show precisely what advice he offered. Then, on day 19 of the trial, Judge Martin Nolan expressly wrote Heron out of the script. Given ignorance of the law was no defence, the trial judge ruled, legal advice was irrelevant to the guilt or innocence of the accused.

From that point on, there was to be no mention of Heron, his firm or his involvement in Project Maple.


State of knowledge
But the nature of the legal advice received by Anglo as they scrambled frantically to unwind businessman Seán Quinn’s huge interest in the bank – or, more specifically, the state of knowledge of Anglo directors Willie McAteer and Pat Whelan about that advice – has moved centre stage as attention turns to the sentences to be imposed on the two former bankers.

Believing a reputable law firm gave the green light for the July 2008 scheme may not have been a defence, but it can be cited in mitigation when it comes to deciding on a penalty.

Yesterday, Heron sat in the witness box, his back to McAteer and Whelan in the dock, and said he never gave positive legal advice on Anglo’s plan to lend to 10 wealthy clients, known as the Maple 10, to buy the bank’s shares. Heron said he was told only of lending to Quinn family members – the second part of the July 2008 deal. He said he told Fiachre O’Neill, Anglo’s head of compliance, that the Companies Act generally prohibited lending by a company for the purpose of buying its own shares, but there was an exception if the lending was in the ordinary course of the business of the bank. He believed it was “not impossible” that this exception could apply in the case of the Quinn family loans.

Heron, who no longer works for Matheson Ormsby Prentice (now Matheson), told the judge he did not know about lending to the Maple 10 until late July – after the transaction had been executed. When he wrote a summary of his advice after the deal went through, it was highly qualified guidance of the “if you’re happy, I’m happy” variety (this prompted the judge to wonder why anyone would ask for legal advice at all).

Heron’s evidence reveals some key points of dispute. First, we know that Mr O’Neill, who was one of Heron’s main points of contact at Anglo in July 2008 and gave evidence at the trial after being given immunity from prosecution, maintains Heron was told of lending to the Maple 10 before the deal went through.


Conference call
On the eve of the transaction – Saturday July 12th, 2008 – a conference call took place between Heron and the investment bankers Morgan Stanley. A number of Anglo staff dialled into the call. Several people who took part in that call maintain that legal advice given during the conversation was that the scheme was legal.

Heron told the court yesterday he has no memory at all of the content of that call. His only notes of it are a few scribbled words in a diary, including “Maple 13 per cent” and “10 ind 14.9 per cent”. Heron said these notes do not show he had any knowledge of lending to the Maple 10.

1 Harry and Meghan will no longer be working members of British royal family
2 Mary Lou has to call for the smelling salts as SF councillor deals a knock-out blow
3 Dublin gangland figures involved in Drogheda feud that killed 17-year-old
4 Peter Casey on the campaign trail: ‘My ideal job would be minister for health’
5 Election 2020: Sligo-Leitrim constituency profile
Real news has value SUBSCRIBE