State could face fines of €25,000 a day if ruling made in favour of the commission 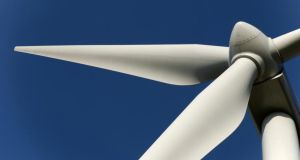 Just a day after the European Commission unveiled new climate change goals for 2030, Ireland was yesterday referred to the European Court of Justice for its failure to meet EU renewable energy targets for 2020.

The European Commission announced yesterday it was referring Ireland to the Luxembourg court for failing to fully transpose the EU’s renewable energy directive, a move that could lead to significant fines.

The directive, which applies until 2020, sets a number of binding emissions targets on member states, including the requirement that the EU derive 20 per cent of its energy consumption from renewable sources.

The directive is separate to the EU’s new 2030 climate and energy package unveiled in Brussels on Wednesday which will replace the 2020 legislation, and advocates the removal of binding renewable energy targets for member states. In its announcement yesterday, the commission said that while the directive had to be transposed by member states by December 2010, Ireland had failed to transpose all the legislation into its national laws.

It had previously sent a letter of formal notice to Ireland in January 2011 and a “reasoned opinion” in June 2012, setting out why it was considering referring the matter to Europe’s highest court.

Litigation
“Despite these proceedings, full transposition is still pending in Ireland,” the commission said yesterday. While the litigation procedure is at an early stage, Ireland could be fined more than €25,000 a day from the date of judgment if the court rules in favour of the commission. However, the Department of Communications, Energy and Natural Resources stressed that the vast majority of the legislation had been transposed, and would be introducing additional legislation “as a matter of urgency this year”.

Among the aspects of the EU directive not yet achieved by Ireland include Ireland’s commitment that 10 per cent of all transport energy would come from renewable sources by 2020, the management of grid access for electricity for renewable sources, and adherence to sustainability criteria for biofuels and bioliquids.

“The department remains committed to ensuring full compliance with the full requirements of the directive,” a spokeswoman said yesterday in response to the infringement announcement.

Since the Lisbon Treaty the European Commission can ask the European Court of Justice to impose financial sanctions if states fail to transpose EU legislation into national law within the required deadline. The commission has already referred Austria, Poland and Cyprus to the court for failing to transpose the renewable energy directive.

While the EU this week launched its proposal on the new climate change package to replace the 2020 targets, advocating the removal of mandatory binding targets at a member state level, Ireland must still comply with its individual renewable targets until 2020.

Electricity
The 16 per cent target for renewable is made up of a number of sub-targets, including the requirement that the contribution of renewable energy to electricity in Ireland must reach 40 per cent by 2020. Speaking yesterday at the World Economic Forum in Davos, European Commission president José Manuel Barroso defended the EU’s record on climate change, despite widespread criticism from environmental groups that its proposal for 2030 unveiled on Wednesday is unambitious. Mr Barroso called on world leaders to commit to ambitious climate change goals, arguing that the EU “continues to be a pioneer for global climate action.”