Man faces charges of threats to kill, harassment and threats to damage a window 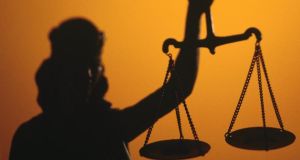 An estranged husband allegedly threatened to bath his ex-wife in acid and mutilate any new partner, the High Court in Belfast heard yesterday.

Nerijus Karazinas is accused of sending a series of menacing text messages and warning her: “You won’t belong to anyone else.”

The 35-year-old Lithuanian national, with an address at Killcomain Grove in Portadown, Co Armagh, faces charges of threats to kill, harassment and threats to damage a window. He was refused bail due to the potential risk he poses to his former wife. She alerted police after he allegedly turned up drunk at her workplace earlier this year.

Further threats to inflict similar harm if he found out she had “cheated” on him were allegedly sent. In one it was claimed that he stated: “I pray to God, if you don’t believe me, you won’t belong to anyone else.”

The court heard he also warned that “a lot of people will be crying” because he would kill anyone for her.

But refusing the application, Mr Justice Maguire ruled: “I would not have confidence this is a man whose behaviour could be sufficiently controlled by bail conditions to avoid the risk that is obvious to his former partner.”