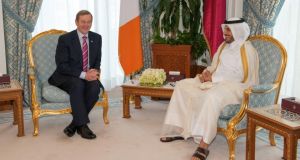 Trade missions can be a gruelling business. But even after a score of engagements during his two days in Riyadh, the Taoiseach woke in Doha yesterday morning with a noticeable spring in his step.

His schedule was no lighter here in the Qatari capital, a place he was visiting for the first time.

There were meetings with a bank, an investment agency, the prime minister, a business council, an airline, and an address to local businesspeople and the Enterprise Ireland trade delegation. The Taoiseach took them all in his stride.

First up was a visit to engineering contractors Sepam, where a buoyant Mr Kenny met a host of people who have relocated to this visually striking city. They came from all over the world. Clonmel. Cashel. Longford. Slovakia. And Kazakhstan.

Without flinching, the grinning Taoiseach replied: “Dá labhróinn leat i mo theanga dúchais ó iarthar na hÉireann ní thuigfeadh tú mé. (If I were to speak to you in my native tongue from the west of Ireland you wouldn’t understand me).”

Reverting to English, he added: “This place is going to be exploding for the next 40 years.”

Sepam, and its Clonmel-bred chairman Gus Kearney, hope so, as the Qatari boom has seen the firm land a series of contracts.

Future co-operation
After visiting Qatar Airways, where a direct Dublin route was mooted, it was back to his hotel for a meeting with Qatar Investment Authority about securing investment for Ireland. That conversation will continue in Dublin in March.

A meeting with Prime Minister Abdullah bin Nasser bin Khalifa al-Thani followed. The travelling media could not attend but Mr Kenny advised at a subsequent event hosted by the Qatari Businessmen’s Association he had been treated to camel for lunch. Members of the dining party enjoyed it and were “racing certainties” to come back, he quipped.

The businessmen’s association chair, Sheik Faisal bin Qassim al-Thani, said he was honoured to welcome the “elite” Irish delegation. Qatar’s boom was going well because of the “wise leadership” of the Emir, Sheikh Tamim bin Hamad al-Thani, he said.

The Taoiseach explained the country had recovered from past problems and the doors were “wide open” for business. He pointed to the recent endorsement of Ireland by Forbes as the best country in the world to do business in – a notion he has been chasing for years.

Mr Kenny said the fast-growing Doha “skyline speaks for itself”. The Irish had built many nations around the world, he continued. Members of the trade delegation hope this trip leads them to build others.

People in Qatar are proud about winning the right to host the 2022 World Cup. The Taoiseach said he hoped the event, and the new managerial team, would give the Irish a reason to visit by the thousand. “Who knows, we might meet in the 2022 World Cup semi- or quarter-finals,” he declared.

Migrant workers
The treatment of migrant workers here during the building boom has drawn criticism internationally from the European Parliament, Fifa chief Sepp Blatter and organisations such as Amnesty International.

Mr Kenny said his sense was the new stadiums would be “world-class”.

“My assumption is that those who work internationally on such projects would have proper working conditions and proper facilities and I expect that to be the way.”

There was good news from home to further raise the Taoiseach’s spirit – a bond sale had passed off famously and a Fine Gael rebel, Brian Walsh, was apparently keen to return to the party nest after leaving over the Protection of Life During Pregnancy Bill. He didn’t rule it out.