Dublin man fails in appeal over conviction for murder 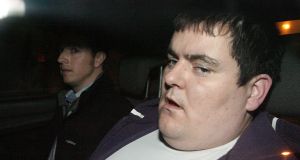 A convicted murderer whose lawyers claimed he could not get a fair trial due to the “scandalous” handling of a Garda informer has had his conviction upheld on appeal.

Peter Kenny (35), of McCarthy’s Terrace, Rialto in Dublin, had pleaded not guilty to the murder of John Carroll (33) who was shot dead in Grumpy Jack’s pub in the Coombe in Dublin 18th, 2009.

He was found guilty by a Central Criminal Court jury and given the mandatory life sentence by Mr Justice Barry White on July 19th, 2011.

Upholding his conviction, the Court of Appeal said it had not been persuaded that Kenny’s trial was unsatisfactory or the verdict unsafe.

Giving judgment in the three-judge court, Mr Justice George Birmingham said John Carroll was in the Jack’s pub in the Coombe area of Dublin when a motorcycle pulled up outside carrying two people. The pillion passenger dismounted, walked into the pub wearing a motorcycle helmet and shot Mr Carroll a number of times.

Christopher Zambra, who was alleged to have been the main organiser of the plot, was acquitted following a retrial.

Bernard Hempenstall was alleged to have been party to the plan and sitting in the company of the deceased when the shooting took place. In his case the jury returned a verdict of not guilty.

Damien Johnson was alleged to have been the driver of the motorcycle but he was acquitted by direction of the trial judge.

The prosecution’s case was that Kenny was the pillion passenger who entered the pub and fired the shots.

“On his own admission,” Mr Justice Birmingham said, “Mr O’Brien was party to the plot to murder Mr Carroll”.

Mr Gillane, along with Dean Kelly BL, said the genesis of Mr O’Brien’s evidence, and the manner it was brought about was “unorthodox, irregular and involved illegalities”. Some aspects of how Mr O’Brien was handled by the Garda­ were “scandalous”, counsel said.

From 2005 onwards, Mr O’Brien was giving information to Det Sgt Adrian Whitelaw as an informer. Garda guidelines on how informers were to be dealt with were not just inadvertently breached, but “knowingly breached”, counsel claimed.

Mr Gillane said Det Sgt Whitelaw had received the guidelines, relating to the Covert Human Intelligence Source (CHIS), had read them, understood them and “nonetheless continued to operate in the way that he did”.

Two days after the shooting, Mr O’Brien was arrested on suspicion of murder, taken to Pearse Street Garda station and brought into a room for a meeting with Det Sgt Whitelaw and the late Superintendent PJ Browne.

However, almost every piece of material related to the meeting resulted in huge divergences in terms of Mr O’Brien’s motivation for making the statement, who mentioned the witness protection programme, who mentioned immunity and whether immunity was applicable to this prosecution.

In his ruling admitting the evidence of Mr O’Brien, the trial judge said that despite the “various illegalities and improprieties on the part of both Supt Browne and Sgt Whitelaw,” the trial was not rendered unfair.

Mr Justice Birmingham said the prior contact between Mr O’Brien and gardaí between 2003/2005 and the time of the murder could not possibly provide a basis for excluding his evidence. It was true that contact was outside the CHIS system but the fact that someone had acted as a Garda informant, registered or not, does not mean that they can never give evidence.

He said it would undoubtedly have been preferable if the meeting in the office of Det Supt Browne had been video recorded. But in the courts view, the unsatisfactory features of the meeting would not not see the case halted nor were they matters that could see the issue withdrawn from the jury.

The Court of Appeal agreed with the assessment of the trial judge that the Garda’s return of €3,000 to Mr O’Brien was “wrong”, something which has in fact been confirmed as being the proceeds of Mr O’Brien’s drugs activity in a subsequent trial.

Mr Justice Birmingham said the issues in the case were considered with care and on an individual basis by both the trial judge and ultimately the jury.

The trial judge gave the jury an exceptionally strong corroboration warning. The jury then acquitted one of the three accused, disagreed in respect of a second and convicted the third.

He said Kenny was convicted in circumstances where there was very considerable supporting and corroborative evidence.

In summary, Mr Justice Birmingham, who sat with Mr Justice Alan Mahon and Mr Justice John Hedigan, said the court had not been persuaded that Kenny’s trial was unsatisfactory or the verdict unsafe. Accordingly the court dismissed the appeal.