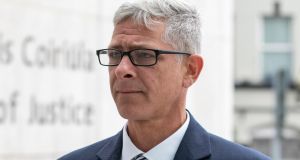 Brian Stacey (46) said he was not the sort of person that cursed. “I don’t believe what goes into my mouth defiles the body, it’s what comes out the mouth that defiles the body.” Photograph: Collins Courts

A yacht captain has been found guilty of being drunk while erratically sailing a pleasure boat in Dublin Port shipping lane.

Dublin Fire Brigade and RNLI lifeboats were called out to deal with an incident on the Liffey at Dublin Port that commenced at about 6am on June 1st, 2017.

The sailors on a small 26ft (8m) quarter tonne pleasure craft named the Peja refused to get out of the shipping lane and delayed the approach of the 90m Corinthian, a 4,000-tonne cruiseliner, Dublin District Court heard.

During the trial, evidence was given that gardaí were also brought out on the water to deal with the situation but were allegedly told to “f*** off”.

The yacht skipper had insisted it was his “God-given right” to sail his vessel on the Liffey, while his co-accused stripped off when he made landfall on the city quays and was arrested naked.

The episode started after the small yacht left its mooring at a south Dublin bank sailing club. After a couple of hours, the vessel, which had an outboard engine, was brought to a halt at Sir John Rogerson’s Quay while its owner was taken to Poolbeg marina at about 8.20am.

They deny careless sailing, operating a vessel while intoxicated and engaging in threatening and abusive behaviour at the shipping lane on the River Liffey.

After a four-day non-jury trial and a five-week adjournment to find a date to resume the case and to consider the verdict, Judge John Hughes found them guilty. They will be sentenced next week.

Giving evidence, yacht captain Mr Stacey had told the court he and friends had gone for a river trip early that morning. There was no alcohol on board and he could not remember the last time he had an alcoholic drink, he said.

Questioned about CCTV showing him drinking from bottles, he denied Garda evidence that they contained beer and claimed they were a foreign brand of glass water bottles.

He denied claims he used profanities and told the court, “I told them it was my God-given right to sail down the Liffey if I feel like it.”

He said he was not the sort of person that cursed. “I don’t believe what goes into my mouth defiles the body, it’s what comes out the mouth that defiles the body, that is why I look after the hygiene in my mouth,” he said.

Asked why he was seen removing a number of bottles at one point when he moored, he said he was cleaning out rubbish from his boat.

The co-accused, Mr Stephens, said he had to dock the boat when his friend switched over to the harbourmaster’s vessel. Mr Stephens said he had never operated a motor boat before and was obeying his co-accused’s instruction because he was the captain.

CCTV evidence showed him being helped onto the quays, where he removed all his clothing.

Mr Stephens said he did that because there were armed gardaí waiting and he was anxious and did not want to be shot. He had to be helped because he suffered from arthritis. He also said he did not drink during the day-time.