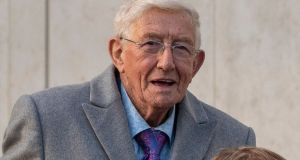 Sylvester “Sil” Fox (86) has pleaded not guilty to sexual assault of a woman at a bar in the city-centre’s southside on December 17th 2018. Photograph: Collins Courts

A woman has claimed she was groped by veteran comedian Sil Fox when she asked to have her photo taken with him on a Christmas night out.

Sylvester “Sil” Fox (86) has pleaded not guilty to sexual assault of a woman at a bar in the city-centre’s southside on December 17th 2018.

He has gone on trial before Judge Paula Murphy at Dublin District Court.

The hearing resumes on March 11th next.

Mr Fox, who grew up in the Liberties in Dublin but has an address at Wellington Lawn, Templeogue, had been asked for a selfie picture with the middle-aged woman, the court heard.

The complainant, who cannot be named for legal reasons, told Judge Murphy she had been on a Christmas night out with friends.

Questioned by State solicitor Alva O’Herlihy, she claimed that as her friend said “smile”, “Mr Fox proceeded to put his hand on to my lap, on to my groin and he tickled my vagina, and doing so he said, ‘You will always remember where this picture was taken’.”

She said she was stunned and totally embarrassed and it was “totally without my consent”.

The night continued and there was joking and laughing and after the band finished she confronted Mr Fox who was talking to other men.

She told Mr Fox: “You sexually assaulted me, you groped me, and you are a dirty old man”. His reply, she claimed, was “You should be so lucky” and she then told him she would “put you on Facebook”.

Cross examined by defence counsel Emer Ni Chuagain, instructed by solicitor Michael French, she said the assault lasted for 30 seconds during the taking of the photograph. Asked why he was smiling in the photo, she said she was shocked and did not know what to say.

Asked why she had said in her statement it was a split second only, she said that was a typo and should have said split seconds.

She could not explain why a friend who was present had a different recollection of what she told her Mr Fox had whispered.

Counsel said the first garda she reported it to also had different version.

Her comment about putting him on Facebook was spur of the moment and she was not computer literate, she said.

CCTV was shown to her and she agreed it took three seconds, not 30, to take the photo and her hand was going toward Mr Fox as he leaned in.

She accepted his left hand could be seen in front on the table as the photo was taken and his other hand was on the back of the chair.

Counsel suggested it was impossible and she replied that she did not know but she said he had lowered his hand and touched her vagina. Maybe it felt like 30 seconds, she added. She also said maybe he brought his other hand around and she rejected suggestions it did not happen.

Mr Fox accused her of trying to ruin his reputation with false accusations.

In the account he gave gardaí, he wrote that he had never been accused of anything improper during 50 years in showbusiness. “I have been in hundreds of selfies, as far as I am concerned I am being shafted”.

Detective Garda Shane Behan agreed with defence counsel that Mr Fox he had no prior convictions and had never been accused of an offence before.

The State has closed its case and the court is to hear a defence application when the case resumes.