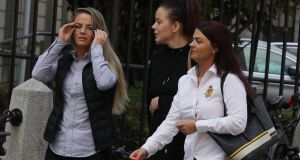 A Traveller rights activist and two of her friends have failed in their claim of discrimination after one of them was refused entry to a Dublin pub.

Donegal based activist Eileen Flynn and her friends Helen and her sister Melissa Grogan from Labre Park, in Ballyfermot in Dublin, brought the action against the The Penny Hill Public House in Lucan.

Dublin District Court heard the three women had gone to the pub on the night of April 14th 2018 and they believed bouncers knew they were Travellers because of their accent.

However, Judge Michael Coghlan held that he did not think this would have identified the three women as being members of a particular group.

The application was brought under Section 19 of the Intoxicating Liquor Act 2003 and the Equal Status Act 2000. Penalties include temporary closure and compensation.

Ms Flynn told Judge Coghlan she was an activist with the National Travellers Women’s Forum. She had been back in Dublin on the night before her wedding and decided to go to the pub with her friends.

The Penny Hill was chosen because Helen Grogan had been there previously with settled people.

She said when Helen went in ahead of her and Melissa Grogan, a doorman at the pub put his hand on Helen Grogan’s shoulder and said “not tonight”.

Ms Flynn said they had not been drinking before hand and were passive when they entered and were confident. Other people were not stopped, she said.

She said she had got not explanation for the refusal despite asking three times.

Constance Cassidy SC, for the Penny Hill Public House, put it to Ms Flynn that she told one of the doormen she had sued another pub before and “they have to let me in now” and that “you’ve f***ing messed with the wrong girl”.

In reply, she told counsel they had messed with the wrong girl, she was five months pregnant and wanted a better world for Travellers.

She told the court she used her phone to live-stream it to thousands of her Facebook followers. She called the Garda and after half an hour she and her friends went to a club in the city-centre instead.

The doormen denied they stopped Helen Grogan because she was a Traveller or knowing they were members of that community because of their accents.

Frank Byrne who was head of security at the pub said Ms Flynn was irate and pushing the “Travellers rights angle”.

Doorman Sean Wall said Helen Grogan was refused entry because he was aware she had been refused on a previous occasion by anther colleague and he recognised her.

He said he did not know she was a member of the Travelling community.

Judge Michael Coghlan said he appreciated that Ms Flynn through her work encountered discrimination and he expected she was more sensitive to it.

Assumptions were made on both sides and it had to be looked at in the cold light of day, he said, but that was not the issue, which was whether or not there was an act of discrimination based on ethnicity, of members of the Travelling community.

Dismissing the case, he said he would find it difficult to identify them in terms of a particular group due to the their accent.