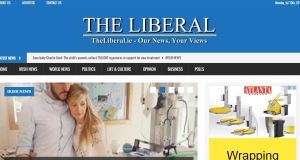 Homepage of TheLiberal.ie. Apologies from the website operator Leo Sherlock acknowledging he had published articles without a licence and had infringed the copyright of the two news organisations were read in court and the full settlement terms were handed to the judge.

Two court cases taken against Leo Sherlock of TheLiberal.ie website for multiple breaches of the copyright of two news organisations have been settled.

Mr Sherlock is to publish apologies to Independent Newspapers (Ireland) Ltd and court reporting agency CCC Nuacht Teoranta over the use of their material on the site in 2014, 2015 and 2016.

Mr Sherlock (35), of Glenvar, Ardee Road, Collon, Co Louth, has also agreed to pay substantial but undisclosed damages to both parties as well as costs, and he has agreed to retract the published material which infringed copyright. He has also acknowledged the “important work” that court reporters do in informing the public.

When the civil cases came before Judge John Coughlan at Ardee District Court on Monday, solicitors for the parties said the matters had been settled.

Apologies from Mr Sherlock acknowledging that he had published articles without a licence and had therefore infringed the copyright of the two news organisations were read in court and the full settlement terms were handed to the judge.

Independent Newspapers, represented by Meagher Solicitors, claimed multiple breaches of the newspaper group’s copyright, including the wrongful alteration and reproduction of a photograph used on a September 1st, 2016 article about the death of a young boy after he was hit by a car while cycling to school.

On May 16th last year, TheLiberal.ie also wrongfully reproduced a photograph of a crash in an article about a bus crash in Dublin involving passengers with special needs.

CCC Nuacht, represented by PG McMahon Solicitors, complained of four instances of breach of copyright, including one on July 15th, 2015 when TheLiberal.ie published its article about a Romanian national sentenced for fraudulently claiming welfare payments.

The website also infringed the copyright of the courts agency in reproducing its stories about a babysitter jailed for sexually abusing a baby, and the jailing of a former Church of Ireland worker for the rape and molestation of young boys.

Both plaintiffs had been seeking aggravated and exemplary damages under the provisions of the Copyright and Related Rights Act 2000 and their costs.

Solicitor Paul Meagher for Independent Newspapers read the text of an apology which is to be published on the homepage of TheLiberal.ie later this week and to remain there for seven days.

The apology read: “I, Leo Sherlock, apologise for my unauthorised use of photographs owned by Independent Newspapers (Ireland) Limited on my website named ‘theLiberal.ie’. I acknowledge that by using same without licence, permission, authority or consent I infringed copyright. I undertake not to commit any further breaches of copyright. I have agreed to pay Independent Newspapers (Ireland) an undisclosed sum in damages together with its costs.”

The text of an apology to CCC Nuacht Teo was read to the court by solicitor Rossa McMahon. It read: “Between June 2015 and November 2016, TheLiberal.ie published four articles, which have since been deleted from this website, which reproduced or adapted articles by CCC Nuacht, a leading Irish court news agency whose stories appear in Irish media outlets.

“I, on behalf of TheLiberal.ie acknowledge that these articles were published without obtaining a licence to do so and that they thereby infringed the copyright of CCC Nuacht.

“I acknowledge the important work of court reporters in informing the public about court proceedings and in furthering the administration of justice in public as required by the Constitution.

“I on behalf of TheLiberal.ie apologise to CCC Nuacht and its court reporters for publishing these stories without obtaining and paying for a licence entitling them to do so, and I undertake that neither I nor TheLiberal.ie will publish or adapt any further copyright materials owned by CCC Nuacht without licence.”

Mr Sherlock has agreed as part of the settlement to simultaneously publish links to the apology on TheLiberal.ie’s Facebook and Twitter accounts.

Mr Sherlock, who was not in court, was represented by Malachy Steenson of Canning Landy Solicitors.

The case, which has been before the court on six separate dates, was adjourned to September 11th to facilitate the implementation of the terms of the settlements. Mr Meagher told the court he was “very optimistic” that the matters would be settled to the satisfaction of the parties by that date.

1 Coronavirus claims one more life and 11 new cases reported in Republic
2 Covid-19: Travel restrictions to stay and 'green list' put on hold amid fears of second wave
3 WHO stops hydroxychloroquine trials for hospitalised Covid-19 patients
4 Bobby Storey: The IRA's planner and enforcer who stayed in the shadows
5 Rare whale dies after getting into distress in Wicklow Harbour
Real news has value SUBSCRIBE