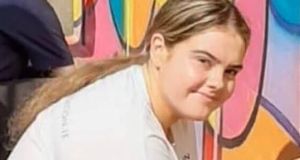 Det Garda Holland said gardaí were seeking that the teenager would have no contact directly or indirectly, including via social media, with the family of the late Kimberly O’Connor (above).

A teenager has appeared in court over the death of a 16-year-old who was killed when the car in which she was a front passenger crashed just 50 yards from her family home in Cork city earlier this year.

The 17-year-old-boy, who cannot be named because he is a juvenile, was charged in relation to the death of Kimberly O’Connor in the crash on Harbour View Road in Knocknaheeny on February 19th.

Ms O’Connor, a Transition Year student at Terence MacSwiney Community College in Knocknaheeny, was a in the Seat Toledo when it hit a wall near her home.

The teenage boy was charged with nine motoring offences when he appeared before Judge Olann Kelleher at a vacation sitting of Cork District Court.

He was charged with one offence of dangerous driving causing the death of Kimberly O’Connor and serious bodily to another passenger in the car, Christopher Dowdall (19).

He was also charged with four offences of failing to stop, failing to remain at the scene, failing to report an occurrence and failing to give appropriate information, all relating to the fatal crash.

Det Garda Brian Holland gave evidence of arrest, charge and caution and told the court the teenager made no reply to any of the nine charges when they were put to him.

He said gardaí had no objection to the teenager being granted bail on certain conditions and the boy’s solicitor, Emma Leahy confirmed her client was willing to abide by those.

Det Garda Holland said gardaí were seeking that the teenager to reside at his home address in Cork city and keep a curfew there between 9pm and 7am, that he would not consume any intoxicants and would sign on every Monday and Friday at Gurranebraher Garda Station.

Det Garda Holland said gardaí were further seeking the teenager would have no contact directly or indirectly, including via social media, with the family of the late Kimberly O’Connor. The gardaí also wanted the accused to give an undertaking not drive any car or mechanically propelled vehicle as part of his bail conditions.

Judge Kelleher asked the teenager if he understood the bail terms and he warned him if he was seen by gardaí driving a car or breaching any other of the bail terms, he risked being put into custody.

Sgt John Kelleher said gardaí had received the DPP’s directions on the matter and the DPP had directed the matter be dealt with on indictment before a judge and jury at circuit court level.

Solicitor, Emma Leahy said her client understood the bail terms and was consenting to a long remand and Judge Kelleher remanded him to appear at Cork Children’s Court on September 18th

Judge Kelleher granted free legal aid to the teenager, who was accompanied in the court by his mother and two grandparents.