Man charged over largest cash seizure in history of the State

Darren Hoey remanded in custody after appearing in court in connection with €3.7m haul 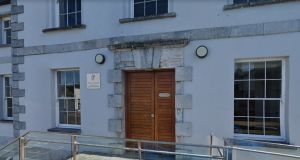 A 46-year-old man has been remanded in custody after he was charged in connection with the seizure of the largest ever sum of cash in the history of the State.

Darren Hoey of Oak Drive, Ballacollig, Mountmellick, Co Laois, was brought before Fermoy District Court in Co Cork on Friday evening. He was charged with two offences following the seizure on Thursday of almost €3.7 million by gardaí investigating criminal activity.

Mr Hoey was charged with possessing €3 million in cash, knowing, believing, or being reckless as to whether it was the proceeds of crime at Farranstack, Lisselton, Co Kerry, on September 30th.

Mr Hoey was also charged with possessing €694,845 in cash, knowing, believing, or being reckless as to whether it was the proceeds of crime at Oak Drive, Ballacollig, Mountmellick, also on September 30th.

Det Garda Liam Brennan of the Garda National Drugs and Organised Crime Bureau gave evidence of arresting Mr Hoey at Tralee Garda station in Co Kerry at 3.35pm on Friday for the purpose of charging with the two offences.

He told the court how when he put the two charges, which are contrary to the Criminal Justice (Money Laundering and Terrorist Financing Act) 2010, to Mr Hoey at 4.10pm, the accused made no reply to either charge.

Defence solicitor Kieran O’Keeffe said his client was making no application for bail at this point and was consenting to a remand in custody without prejudice to any future bail application.

Mr O’Keeffe said Mr Hoey was also reserving his position with regard to making any application for free legal aid in respect of the two charges. Judge Brian Sheridan noted Mr O’Keeffe’s submissions.

Insp Tony Sullivan applied to have Mr Hoey remanded in custody to appear again at Tralee District Court on October 7th. Judge Sheridan granted the application and remanded him in Cork Prison to appear in Tralee on that date.

Mr Hoey wore a Covid face covering in court and did not speak other than to confirm his identity during the brief hearing, which was held amid tight security.