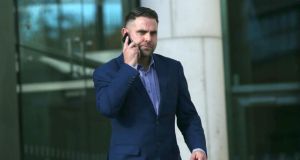 A male model accused of possessing €1.1 million in crime proceedings has been served with a book of evidence and sent forward for trial.

Mark Andrew Adams (40) with an address at Castleheath, Malahide, Dublin was charged in September with four offences under the Criminal Justice (Money Laundering and Terrorist Financing Act).

He faces trial on indictment.

The father-of-one, who once appeared in a Garda drink-drive awareness campaign, faced his fourth hearing on Friday at Dublin District Court.

He had previously been held in custody with consent to bail which he has now taken up in his own bond of €1,000.

He returned to court on Friday for a trial order.

The book of evidence was served at 11:05am and signed by Detective Tom Victory of the Garda National Economic Crime Bureau (GNECB).

Judge Colin Daly made a return for trial order at the request of the Director of Public Prosecutions.

After he was sent forward for trial, the accused was told by the judge that he had 14 days to notify the State if he intended to use an alibi in his defence.

Mr Adams is to appear at Dublin Circuit Criminal Court November 29th next.

He was unemployed and has been granted legal aid to include representation of senior counsel due to the complexity of the case.

His solicitor Danny Nolan described the book of evidence as “voluminous”. He said the case involved allegations of money laundering of over €1 million. Mr Adams did not address the court and has not yet indicated how he will plead.

It is alleged he had various sums, allegedly proceeds of criminal conduct, amounting to approximately €1,186900, over five years.

His case follows and investigation by the GNECB. He had nothing to say in reply to the charges, Detective Garda Victory had said at the accused’s first hearing on September 6th last.

Under the terms of bail, he has to reside at his current address and sign on three days a week at Malahide Garda station.

Mr Adams, who has surrendered his passport and an EU travel card, cannot apply for new travel documentation, he had to provide gardaí with his mobile phone number, and he must remain contactable 24 hours a day.