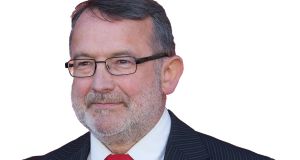 A Cork councillor has been urged by a judge to get himself a solicitor to advise him on the law regarding having his case heard in Irish after the judge refused to refer the matter to the High Court.

Cllr Diarmaid Ó Cadhla (56) asked Judge Olann Kelleher to refer the matter to the High Court after Judge Kelleher told Mr Ó Cadhla he was not entitled to have his case heard entirely in Irish.

Mr Ó Cadhla, who is charged with five counts of criminal damage over the blacking out of Queen Victoria’s name from street signs in Cork, maintained he was entitled to have his case heard in Irish.

Speaking in Irish with interpreter Sean Ó Luasa translating his application for Judge Kelleher, Mr Ó Cadhla argued there was case law which entitled him to be tried in Irish by a judge fluent in Irish.

He cited the case of Peadar Ó Maicín vs Ireland to have his case heard entirely in Irish, and asked Judge Kelleher to refer the issue to the High Court for adjudication solely on the languages issue.

But Judge Kelleher said that while Mr Ó Cadhla was entitled to give his evidence in Irish and cross-examine witnesses in Irish, he was not entitled to have the case heard entirely in Irish.

He refused to accede to Mr Ó Cadhla’s request to refer the matter to the High Court, and urged him to seek legal advice on both the language issue and the criminal damage charges he was facing.

Judge Kelleher adjourned the matter until December 18th to allow Mr Ó Cadhla to indicate whether he was pleading guilty or contesting the matter, in which case a date will be fixed for trial.

A member of the People’s Convention, Mr Ó Cadhla ran unsuccessfully for Cork City Council in 2015 but was co-opted on to Cork County Council in February 2017 after the death of Cllr Claire Cullinane.

He is also a member of the Cork Street Names Campaign, set up to rename streets in Cork named after Queen Victoria, whom they say presided over genocide in Ireland during the Famine.

According to the group, “to honour the name of Victoria, the Famine Queen, in the street names of Cork is an insult to the dignity of the famine victims and to the self-respect of the people today”.

In a statement issued last month, Mr Ó Cadhla described the painting out of Queen Victoria’s name from the street signs in Cork as “an act of civil disobedience and an act of conscientious objection”.

Judge Kelleher remanded both men to appear again at Cork District Court on January 19th, 2018, when the case will be heard after both men indicated they would be contesting all five charges.