Robert Bayly arrested in connection with cannabis with estimated value of €240,000 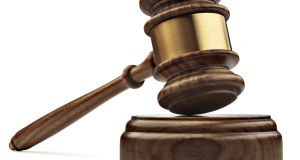 Robert Bayly is charged with possessing cannabis with intent to sell or supply, contrary to the Misuse of Drugs Act.

A former Leeds United and Republic of Ireland youth team football player has been remanded in custody after he was charged over a cannabis seizure in Dublin.

Robert Bayly (29), from Ballyfermot, was arrested when cannabis herb with an estimated street value of €240,000 was seized after gardaí stopped a car at Cherry Orchard Drive on Friday.

He was taken to Ronanstown Garda station and detained for questioning under section two of the Criminal Justice (Drug Trafficking) Act, 1996, before he was brought to appear before Judge Victor Blake during a weekend sitting of Dublin District Court.

Mr Bayly is charged with possessing cannabis with intent to sell or supply, contrary to the Misuse of Drugs Act.

Dressed in a green top and tracksuit bottoms, he remained silent during the brief hearing.

Garda Neil McGrath told the court that when he charged Mr Bayly on Saturday evening, the accused had no reply.

There was no application for bail.

Defence solicitor Wayne Kenny told the court he had serious concerns for the mental health of his client who has not yet indicated how he will plead.

He also agreed to Mr Kenny’s request to grant legal aid to the defendant who was remanded in custody to appear at Cloverhill District Court on May 18th.