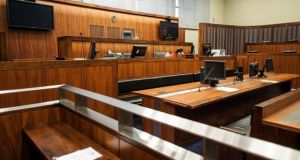 A reporting restriction order was made at the outset of the proceedings after the defence asked that their clients’ identities would not be reported. File Photograph: Collins Courts.

Additional charges for causing “serious harm” have been brought against a married couple after their nine-year-old daughter suffered serious injuries at their home in Dublin.

The child was rushed to Temple Street Children’s Hospital on July 2nd after allegedly suffering burns, bites, swelling as well as bruising.

Gardaí launched an investigation and arrested the mother and father, aged in their 30s, in August. The girl remains in hospital.

The couple, who are non-nationals, were initially charged under Section 246 of the Children’s Act, for alleged treatment of the child at their north Dublin home, in a manner likely to cause unnecessary suffering or injury to her health or seriously to affect her being. It can, on conviction, carry a sentence of up to seven years’ imprisonment.

The woman had an additional charge for failing to seek medical assistance for the girl for a head injury.

They were refused bail in September and appeared again at Dublin District Court on Tuesday.

Each was further charged with causing serious harm to the child, contrary to Section Four of the Non-Fatal Offences Against the Person Act, which can carry a life sentence.

Detective Sergeant Eoin McDonnell told Judge Bryan Smyth the man made no reply when the additional charge was put to him on Tuesday morning.

Detective Garda Aoife O’Brien said the woman was charged in the presence of her solicitor and an interpreter.

She said the woman told her she “choked” in reply to the charge. The accused also clarified what she meant was “she (the woman) felt choked and claustrophobic”, Detective Garda O’Brien added.

State solicitor Stephanie Doyle told Judge Smyth the Director of Public Prosecutions has directed trial on indictment. This means they will face trial in the Circuit Court.

There was no fresh bail application from the couple, who listened to the proceedings with the assistance of an interpreter.

They have not yet said how they will plead and did not address the court on Tuesday.

Judge Smyth remanded them in custody, pending the preparation of a book of evidence, to appear again on December 3rd next.

At a hearing in September, Detective Sergeant McDonnell opposed bail on the grounds of flight risk and he cited the nature and degree of seriousness of the case.

He had told the court the girl “remains in a critical condition as a result of injuries sustained in the incident”.

He said the accused man and woman provided versions of events that had been disproven and refuted, and there was phone data evidence.

Detective Sergeant McDonnell alleged they were aware their daughter was sick but the emergency services were not contacted for a number of hours. A 999 call had been made but it was disconnected after three seconds, he had said.

He had told the court the girl allegedly suffered burns, bites, swelling and bruising which were not believed to have been accidental or self-inflicted.

Detective Sergeant McDonnell feared the accused would flee the jurisdiction if bailed. He said they had fled their country and came to Ireland in 2011.

He also believed they could get assistance to leave Ireland at the earliest opportunity.

The defence had said they applied for asylum here and have applications pending for citizenship. The children were left with grandparents and reunification did not take place for a number of years.

Their other children have been placed in care and Tusla facilitated access.

The court has heard the husband was a qualified tradesman and had been in employment; the woman was a stay-at-home mother.

At their first hearing, on August 9th, Detective Garda O’Brien said she had arrested the 35-year-old woman in Dublin’s south-side two days earlier.

A psychiatric evaluation of the woman had been directed by the court following a request from the defence.

A reporting restriction order was made at the outset of the proceedings after the defence asked that their clients’ identities would not be reported, “given the sensitive nature of the charge”. There were other children involved and the woman had frequent access to them, the court was told.