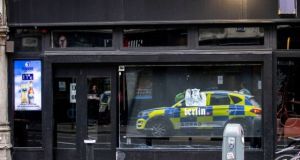 Berlin Bar: a video of a barman hanging off the bar pouring a drink into customers’ mouths went viral. Photograph: Tom Honan

Berlin Bar in Dublin is facing a court challenge to the renewal of its licence after footage emerged last month showing customers crowding around the bar as a man danced on it pouring drinks into their mouths.

The video was shared on social media of patrons in the popular venue on Dame Lane in Dublin city centre. It showed a masked staff member dancing on the bar as he poured shots into dancing customers’ mouths during the event advertised as “A very boozy baked brunch with your buds”.

The bar’s manager, businessman Jay Bourke, described it as “20 seconds of madness” when he commented to the media and said it did not reflect what went on that day at the venue.

However, gardaí have formally objected to the bar retaining its licence in an application which came before Judge Michael Coghlan at Dublin District Court on Thursday.

It has been brought by Garda Inspector John Finucane from Pearse Street station.

Barrister Dorothy Collins confirmed it related to the Berlin Bar, which is operated by her client Trillium Leisure Ltd.

A Garda sergeant told Judge Coghlan the objection was “on the basis of non-compliance with Covid regulations”. Evidence has not yet been heard.

Mr Bourke was not present for the proceedings.

Judge Coghlan also acceded to a request from Ms Collins to direct disclosure of full statements in relation to the various alleged breaches of the regulations by her client.

At the outset of the busy licensing court list, Judge Coghlan reminded parties in the cases that these were “unprecedented times”.

Licences were granted to or renewed by pubs, bars, restaurants and cafes, with pre-conditions that strict compliance would be observed, he said.

If gardaí have found there were acts of misbehaviour, “it is not just an endorsement and a slap on the wrist, it is the loss of a licence”, he warned.

1 Woman stranded in Ireland due to pandemic has ‘miracle baby’
2 Covid-19: Critical cases from NI could put pressure on services in Republic
3 Wet pubs and schools reopening led to rise in Covid cases, says Mayo GP
4 Covid-19: Public urged to ‘stay at home’ as 1,025 further cases confirmed in State
5 Gardaí say 52 people who went missing in 2020 not yet found
Real news has value SUBSCRIBE