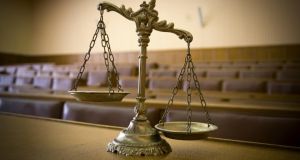 Hand told gardaí he had been in the field on the night, 150m away from the ringfort, moving loose stones in a wheelbarrow, the court heard

Kerry county councillor and publican Danny Healy-Rae has been convicted of allowing people to consume alcohol “after hours” in his premises at Main Street, Kilgarvan in October 2013. The councillor pleaded guilty to the charge.

Kenmare District Court was told 30 people were on the premises when gardaí arrived shortly before 2am on October 12th, 2013 - an hour after they should have been there.

Garda Supt Flor Murphy said when gardaí arrived at 1.55am, “there were 30 people in the pub”.

“Drinking up time was between 12.30 and 1am,” Supt Murphy told Kenmare District Court.

Mr Healy-Rae had one previous conviction for after hours. That conviction was in 2012, the court was told.

The 60-year-old councillor and publican was initially summonsed last December before Kenmare District Court on two separate allegations of after hours - that of Oct 12th, 2013 and another in relation to a Sunday night in March 2014.

On that occasion, Mr Brosnan asked for all documents such as garda notebooks to be furnished to him and the matter was adjourned to allow for that.

When the matter was called, Mr Brosnan said the allegations of March 2014 had been withdrawn. His client was pleading to the “after hours” summons of Garda James Hendrick in relation to October 12th, 2013 - of allowing people to consume alcohol at a time prohibited by the licence.

1 The Sack of Balbriggan: The burning of a town that shocked the world 100 years ago
2 Coronavirus: 396 more cases as public is urged to help protect ‘older and vulnerable’
3 The FinCEN files: The billion dollar a month money trail
4 Lockdown measures and rising anger in Madrid as Covid takes hold again
5 Covid-19 cases among older people continue to rise sharply
Real news has value SUBSCRIBE