Gardaí claim Dublin lightweight, who lives in London, is a flight risk 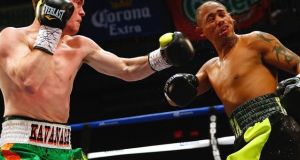 Professional boxer Jamie Kavanagh has been refused bail after he was charged over street brawl following his father’s funeral in Dublin last year.

The 25-year-old lightweight, who is from Mourne Road, Drimnagh, in Dublin but now living in London with his partner and their six-month old baby, faces a single count of violent disorder, which can carry a 10-year sentence.

The charge is in connection with an incident outside the Jackson Court Hotel at Harcourt Street in Dublin city-centre on September 23rd, 2014 during which trouble broke out when door staff refused entry to his group.

Mr Kavanagh, who has a professional boxing record of 20 wins, one draw and one loss, had come back to Dublin for a bout at the National Boxing Stadium last Saturday, November 7th. However, the fighter, nicknamed “The Nuisance”, was arrested at Dublin Airport on Monday evening as he and his partner were about to get a flight back to London.

He was taken to Pearse Street Garda station where he was charged with the offence , which involves an allegation that and others used or threatened to use violence to cause others to fear for their safety.

During a hearing at Dublin District Court on Tuesday, Garda Niall Murray told Judge Michael Walsh that Kavanagh made no reply when he was charged. The DPP had directed that he should face trial on indictment, in the Circuit Court, Judge Walsh was told.

Garda Murray objected to bail citing the seriousness of the case and strength of evidence and fears the boxer would not turn up for his trial.

He said the CCTV evidence is very clear and the defendant is clearly identifiable in the footage. It was alleged that following Mr Kavanagh’s father’s funeral, a number of people went to Harcourt Street but were refused entry at one premises.

They then went to the Jackson Court hotel but were again refused entry after which “there was a very large fight, Mr Kavanagh was involved in this”.

Garda Murray said some of the door staff “were hit a number of times, Mr Kavanagh was in the middle of this”. There were six or seven in the group and five of them have been identified, he said.