Judge reduces award of €250,000 by 20% because of Frank McClintock’s pre-dismissal conduct 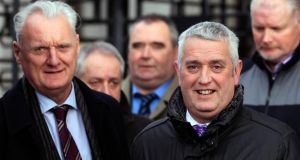 The former head of the HSE’s ambulance service, removed from the post over the improper personal use of a fuel card, has been awarded €250,000 compensation for wrongful constructive dismissal.

However, Judge Alan Mahon, in the Circuit Civil Court yesterday, reduced the award by 20 per cent to €200,000 because of Frank McClintock’s pre-dismissal conduct in using the fuel card for his own use.

The judge told Derry-based Mr McClintock (49) that the loss he had suffered since his sacking almost four years ago was very significant and certainly greater than the maximum €250,000 compensation he could award under current employment legislation.

He told Frank Callanan SC, for Mr McClintock, that his client’s inappropriate use of the fuel card would have warranted and deserved a penalty of some nature by the HSE.

Judge Mahon had heard evidence over two weeks in a challenge by Mr McClintock against an Employment Appeals Tribunal finding that although constructively dismissed, he was not deserving of compensation because of “pre-dismissal events”.

John O’Donnell SC, for the HSE, had counter-appealed and asked the court to overturn the tribunal’s finding of constructive dismissal.

Main focus
Judge Mahon found that when Mr McClintock attended a meeting in March 2012, he did not know the main focus would relate to his use of the fuel card or that the HSE had obtained CCTV footage of him using it at a filling station in Co Donegal.

A report had found that Mr McClintock had misappropriated €9,300 and “only admitted the truth” when evidence emerged. He had been led to believe, before he resigned, that it would be referred to the Garda.

Judge Mahon believed Mr McClintock’s anxiety to resign was a consequence of his discovery at an early stage that he had been found guilty of very serious misconduct without having been afforded the opportunity to defend himself.

“I am satisfied Mr McClintock’s resignation was not voluntary and that he was constructively dismissed,” he said, adding the effect of his dismissal had been close to catastrophic in terms of his future career.

In a statement following the judgment, Mr McClintock said: “I feel vindicated now. It has been a long, hard four years for myself and my family but it’s the first day of the rest of our lives. I am very happy with the outcome.”