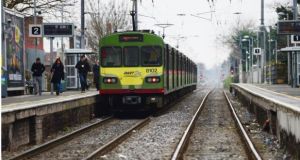 There are delays of up to 30 minutes on DART services this morning after a truck hit a bridge at Clontarf. Passengers simply need to text the word TRAIN followed by the location, carriage number and details of the incident to 51444

A young woman who broke a woman’s eye socket on the Dart has avoided a custodial sentence after the victim wrote to the judge asking not to send her to prison.

She also pleaded not guilty to assaulting Richard McCarthy, breaching the peace and being intoxicated in public on the same date.

She was convicted of the attack on Ms McCarthy but acquitted on all other charges.

The conduct of Goode was, in the words of Judge Desmond Hogan, “unbecoming of a lady” when she boarded the train and began roaring, dancing and “making an absolute and utter nuisance of herself”.

Ms McCarthy was on the train with her husband Richard, who suffered from multiple sclerosis and has since passed away. Ms McCarthy said they had a pleasant day together and that up until then there was a good atmosphere on the Dart as a group of Americans were singing gospel music.

When Goode sat on Ms McCarthy’s headrest. Ms McCarthy told her to “sit down and behave herself.” Goode then punched Ms McCarthy in the face, fracturing her eye socket and causing a bleed on the eye.

Robert McCarthy then restrained Goode and removed her from the carriage before she was arrested.

Ms McCarthy received treatment and needed to wear glasses in the aftermath of the assault. She suffered embarrassment in work and was now wary when getting public transport.

However in her victim impact report she told Judge Hogan she was “not a vindictive person” and she did not wish to see Goode jailed as long as she was remorseful.

Prosecuting counsel Derek Cooney BL conceded that such matters should not be put into a victim impact report but that he was bringing it to the court’s attention to “bring to light the kind of person Ms McCarthy is”.

Judge Hogan praised the victim for her “very reasonable and charitable view.” He said that she “displayed not a little patience to the defendant whose conduct was, to use a word from another age, unbecoming of a lady.”

Goode wept as Judge Hogan imposed a four year sentence which he then suspended for four years on strict conditions. “I’m going to keep this hanging over her head because she has a bit to go yet before she becomes a useful member of society,” he said.

He ordered that she undergo two years probation supervision and that she take part in anger management and restorative justice programmes if directed to do so.

Defence counsel Rory Staines BL said that Goode has no previous convictions and has not come to Garda attention since the incident.