Woman left in middle of nowhere after being raped by three Dublin teenagers, court told 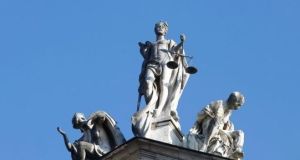 The woman was aged 18 at the time of the alleged offence and the accused were aged 17 to 18.

A woman has told the Central Criminal Court that she was left in the middle of nowhere after being raped by three Dublin teenagers.

The three men, who cannot be named for legal reasons, have pleaded not guilty at the Central Criminal Court to raping a woman at Bull Island, Dollymount, Dublin, on January 5, 2016. The woman was aged 18 at the time and the accused were aged 17 to 18.

In her opening speech to the jury, Anne-Marie Lawlor SC, prosecuting, said the jury would hear that the complainant met the three accused in an internet cafe on the evening in question.

Ms Lawlor said the woman claims they brought her to Dollymount Strand where she was raped by each of the men in turn.

The woman told Ms Lawlor earlier in the trial that the men said they were going for a drive and they would bring her back to where she was. She said she did not want to go at first, but agreed to go for a walk and got into the car with the three men.

She said that the car ended up in the middle of nowhere and was basically out at the sea. She said the driver asked “are we going to have some fun”?

The woman said that the three men got out of the car and then the man who had been in the front passenger seat got in beside her. He asked were they going to do anything and she said no.

She said the man pulled down his trousers, put on a condom and pulled down her trousers. She said she did not want to do anything and he got on top of her and put his penis inside her vagina.

The woman said that after the man was finished, he left the car and the another man came over. She said she did not want to go through that again before this man put on a condom and put his penis inside her.

She said that after the second man was finished, he called over his friend and handed him a condom. The third man then pushed himself on her and kissed her. She said she did not consent to it.

The woman said she felt horrible, shocked and disgusted. She said her door had a child lock on it and she could not get out of the car the whole time she was there.

She said she was told that another person was going to pick her up and bring her home. She said the car headed off very quickly.

The woman said another car arrived containing three men. She said they asked if she was going to have sex with them and she said she did not want to.

She said the driver pulled down her trousers, got a hold of her head and put his penis inside her. She said that another man was standing there with a light on his phone and she was sure that it was being video recorded.

The woman said that the men all got into the car, laughed and they drove away, leaving her in the middle of nowhere. She said she walked away until she found a closed Chinese restaurant and asked people there to call gardaí.

The trial continues before Mr Justice Alexander Owens and a jury.

The jury was empanelled earlier this month but there has been lengthy legal argument and the trial only resumed in evidence on Thursday.