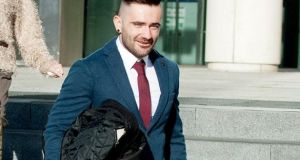 Two Dublin men have gone on trial, having pleaded not guilty to the ‘brutal, callous and shocking’ murder of a 25-year-old father three years ago.

The Central Criminal Court heard Vincent Ryan was shot dead in broad daylight, as he sat in his car on McKee Road in Finglas, after dropping his partner and baby at her home there.

The prosecutor told the jurors that no witness would identify the accused, Paul O’Beirne and Jeffrey Morrow, as the gunmen in another car from which the shots were fired. However, he said that by the end of the case, which would rely heavily on circumstantial evidence, they would be satisfied that they were guilty of Mr Ryan’s murder.

Paul Burns SC said that some of the evidence would include CCTV footage from Mr O’Beirne’s own home that day, allegedly showing him disposing of a seat cover from a car matching the description of the one used in the killing.

Mr O’Beirne (36) of Colepark Drive in Ballyfermot and Mr Morrow (37) of Burnell Court on the Malahide Road in Coolock have each pleaded not guilty to murdering Mr Ryan on February 29th, 2016.

Mr Burns SC opened the trial on behalf of the State.

“The prosecution do not have a witness who was on McKee Road and can identify them as the gunmen in the car, from which the shots that killed him were fired,” he said. “You can nevertheless be satisfied beyond reasonable doubt that the accused are guilty of the murder.”

He described it as a case that relied to a large extent on circumstantial evidence.

“You’ll hear evidence that will convince you beyond a reasonable doubt that Paul O’Beirne and Jeffrey Morrow planned and made preparations for the killing of Vincent Ryan, that they both took steps to bring that killing about and that Vincent Ryan was killed in accordance with those plans,” he said.

He explained that this, in itself, was sufficient to render them guilty of murder as aiders and abetters. However, he said that the evidence would go further and show that they were the occupants of a silver Volkswagen Golf from which the fatal shots were fired.

He said the jury would also hear that they ‘went to considerable lengths’ to cover up the details surrounding the killing and to hide their own involvement.

“The shooting of Vincent Ryan was brutal, callous and shocking, carried out in broad daylight in a residential area at at time when you could expect young children to be coming home from school or out playing on the street,” he said.

Mr Burns explained that Mr Ryan had left his home at Grange Abbey Drive, Donaghmede that day. He was driving a white Volkswagen Golf and had travelled with his partner and their new baby to his partner’s family home on McKee Road.

He remained in the car while his partner brought their baby into the house and, at around 3.10pm, a silver Volkswagen Golf drove up alongside his. A number of shots were fired at him from the silver Golf. He was hit in the head and died in hospital that night.

A stolen silver Golf was found burning on the outskirts of Naas at 4.30pm that day. The owner had previously gotten a seat cover to protect his car from his two dogs.

“When gardaí carried out searches, the car seat cover was found in a bin at (an address on) Colepark Drive, the home of Mr Paul O’Beirne,” said Mr Burns.

The barrister said gardaí had also gathered CCTV footage, which allowed them to track the movements of the stolen Golf before and after the shooting.

He said they’d ascertained that, after the shooting, it had travelled in the direction of where it was burned out. It had travelled along with a Kia Sorento, which was then recorded travelling back to Dublin without the silver Golf.

He explained that the Kia had belonged to Mr O’Beirne’s partner, and that Mr O’Beirne had the use of it.

Mr Burns also told the jury that Jeffrey Morrow had called the gardaí a few nights before the killing and informed them that he had been in a fight with one of the Ryans from Grange Abbey and believed someone was checking out his apartment. Mr Burns said that he was very concerned for his safety and a number of gardai were dispatched, but they had not located a man watching the apartment.

He said that the gardaí searched the homes of both accused a few weeks later. A CCTV system at Mr O’Beirne’s home had been interfered with and gardaí were unable to get any footage from it.

He explained, however, that they searched a vehicle in Kinnegad a few days later and found the CCTV harddrive from Mr O’Beirne’s home. It contained footage from his home captured on the day of the shooting.

“It showed the comings and goings of Paul O’Beirne and Jeffrey Morrow,” said Mr Burns.

“At approximately 2.12pm on the day of shooting, footage shows Paul O’Beirne being collected by a silver Volkswagen Golf,” he continued. “Mr O’Beirne is seen to remove something from the vehicle, a tarpaulin car seat cover, and place it in one of the bins at his home.”

He reminded the jury that the shooting had taken place at approximately 3.10pm, and said the footage showed the two accused returning to Mr O’Beirne’s home around 3.36pm.

“Around 3.52pm they leave... A Kia Sorrento is seen leaving, following a silver Golf at that stage,” he continued. “Around 4.55pm, the Kia returns.”

Mr Burns said the prosecution would also seek to rely on mobile phone traffic in the case.

“It’s the prosecution case that, after hearing all the evidence, you’ll be left in no reasonable doubt of the guilt of the accused in the murder of Vincent Ryan,” he concluded.

Mr Justice Michael White later warned the jury of six women and six men not to go on social media to research anything about the case.

“Rely only on evidence you hear in the witness box,” he said.

The trial continues on Tuesday and is expected to last five to six weeks.