Judge directs the accused (17) be detained at Oberstown detention centre 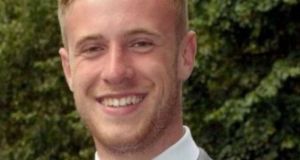 The 17-year-old boy, who cannot be named because he is a minor, was arraigned before the Central Criminal Court on Friday.

He was charged with murdering the student on Bandon Road on January 16 last. Dressed in a grey shirt and black trousers, he stood and pleaded guilty to the offence.

Mr Blair was a native of Ballinascarthy in west Cork and a second-year chemical engineering student at Cork Institute of Technology. He died at Cork University Hospital on January 16 after being stabbed in the neck while attending a student party at a house in Cork city.

Brendan Grehan SC, defending, said his client was present in court with his father and some other relatives.

He said he did not think any psychiatric issues arose in the case but thought it would be useful to have a psychological report.

Mr Justice Paul McDermott directed that the boy continue to be detained at Oberstown Children Detention Centre until April 3, when a psychological assessment and probation report will be made available to the court.

The court heard there will be victim impact evidence on that date.