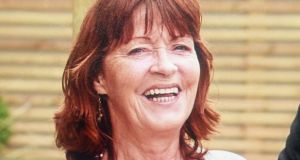 The body of Patricia O’Connor was dismembered into 15 separate parts that were found at nine different locations over a 30km range in the Dublin and Wicklow mountains between June 10th and 14th, 2017.

A father-of-three carried out a sustained attack on a retired grandmother, whose dismembered remains were found scattered in the Dublin and Wicklow mountains, and a claim of self-defence “did not hold any water”, a prosecution barrister has told his trial today.

The State also told the jury there was no evidence of a single defensive wound on the deceased’s body and that murder accused Kieran Greene bore an “ill-will” and “a particular animus or bad feeling” against former hospital worker Patricia O’Connor.

The prosecution barrister said Mr Greene changed his account of what happened to Mrs O’Connor six months later as he was “jealous” and believed there was “a growing relationship” between Louise O’Connor and her former partner Keith Johnston.

Roisin Lacey SC, prosecuting, on Monday began her closing speech in the trial of Mr Greene (35), who has pleaded not guilty to murdering Mrs O’Connor (61) at her home in Mountainview Park, Rathfarnham, Dublin 14 on May 29th, 2017.

The deceased’s daughter Louise O’Connor (41) and granddaughter Stephanie O’Connor (22), both of Millmount Court, Dundrum Road, Dublin 14, and Louise O’Connor’s ex-partner Keith Johnston (43), of Avonbeg Gardens, Tallaght, Dublin 24, are all charged with impeding the apprehension or prosecution of Kieran Greene, knowing or believing him to have committed an arrestable offence: the murder of Mrs O’Connor on May 29th, 2017.

The six-week trial has heard that the body of Mrs O’Connor was dismembered into 15 separate parts that were found at nine different locations over a 30km range in the Dublin and Wicklow mountains between June 10th and 14th, 2017.

Former Deputy State Pathologist, Dr Michael Curtis, has given evidence that Mrs O’Connor’s head was struck a minimum of three blows with a solid implement and the cause of death was blunt force trauma to the head.

Closing the prosecution case, Ms Lacey said it was important that Dr Curtis had pointed out that a single blow had caused three lacerations to the right frontal temporal area of the deceased’s head and these injuries went to the bone of the skull. She also pointed out that despite Dr Curtis’s very thorough post mortem examination of the 15 body parts belonging to Mrs O’Connor, there was no evidence of a single defensive wound on her body.

Ms Lacey said the prosecution’s case was that Mrs O’Connor lost her life in the bathroom of Mountainview and Mr Greene had struck her in a manner which caused lacerations and injuries.

Ms Lacey submitted that forensic scientist John Hoade found no remnants of blood in the house, in a Toyota Corolla car or on any clothes belonging to Mr Greene. Mr Greene explained to gardaí that he had used hot water and bleach to clean away the blood on some tiles nearest the shower step in the bathroom, she said. He also told gardaí he had gotten rid of the boot liner of the car which he said he used to transport Mrs O’Connor’s intact body to Wexford, and had thrown his clothes on a roadside, she remarked.

Ms Lacey also said that although no “gore” had been found at the shallow grave site in Wexford, a ground sheet purchased in a DIY store has never been found and the jury could draw an inference from this.

The barrister submitted that two vital pieces of evidence were found in the shallow grave. The first was a piece of fabric which bore a “remarkable coincidence” in terms of design to the pattern on the frock Mrs O’Connor had been wearing on May 29th, counsel said. The second piece of evidence was two pieces of hair found in the grave which provided moderate support of belonging to Mrs O’Connor. The piece of fabric and hair were supportive of the fact that Mr Greene had placed the deceased in the shallow grave, she said.

She drew the jury’s attention to the receipts from various DIY shops found in a bin at Mountainview and in the car. She emphasised that these purchases formed a very important part in the chain of evidence and the prosecution say that both Mr Greene and Mr Johnston were acting in concert in the purchase of those items.

Ms Lacey submitted that a “coherent narrative” was at play in the case which was made up of “different actors”, who performed different functions and they were essentially acting in concert together for a purpose. The lawyer said each accused was so closely connected in time that it was akin to a jigsaw where one piece fitted into another.

Regarding Mr Greene, she said two different versions of events were being put forward in his defence. In his December interview with gardaí, Mr Greene said he was not responsible for Mrs O’Connor’s death but that her husband Augustine ‘Gus’ O’Connor had killed her, she said.

Evidence has been given that Augustine ‘Gus’ O’Connor was originally part of the trial but shortly before it began, he pleaded guilty to reporting his wife Mrs O’Connor as a missing person to gardaí at Rathfarnham Garda Station, Dublin 14 on June 1st, 2017, when he knew that she was already dead.

Ms Lacey drew the jury’s attention to Mr Greene’s seven interviews from June 2017, where he repeatedly said he was alone and Mrs O’Connor had attacked him with a hurley. Mr Greene maintained that he had disarmed her and acted in self-defence by hitting her and as a result of that she may have died, she said.

Ms Lacey said there was not one single defensive injury to Mrs O’Connor and the basis of self-defence “did not hold any water”. Mr Greene had adopted a highly aggressive stance in a sustained attack, which lasted up to 20 minutes, she indicated.

Furthermore, Ms Lacey said that Mr Greene bore an “ill-will” and “a particular animus or bad feeling” against Mrs O’Connor. He told gardaí he could not let Mrs O’Connor pick on the children anymore, it had been a long 10 years and he was finally free, she said. She also reminded the jury that Mr Greene had told gardaí he had felt “angry” as he hit Mrs O’Connor that night and they were entitled to infer that he had the requisite intention to kill or cause serious injury to her.

Ms Lacey told the jurors that nothing in his June interviews were “vague or scant in detail” and they were rather “elaborate” as well as “effusive in detail and colour”. “It was chronological, sequential and it flowed as a story,” she noted.

She said Mr Greene was in a position to give a detailed and through account in his June interviews because it reflected the reality of what had occurred. “It dovetails completely with Dr Cutis’s evidence in that he was alone in the altercation with Mrs O’Connor and he alone struck the fatal blow,” she said.

Ms Lacey said a “sea-change” in Mr Greene’s interviews with gardaí occurred on December 9th, when he told gardaí he was persuaded to take the blame and was concerned for the children if his partner Louise O’Connor had got arrested. Ms Lacey questioned why this interview was not given in September, when the guardianship agreement was “done and dusted”. The barrister said this was because Mr Greene was jealous and he believed there was “a growing relationship” between Louise O’Connor and Mr Johnston.

The trial has heard that Mr Greene told gardaí in December that he had taken “the rap” and felt he was being set-up, as his girlfriend Louise O’Connor subsequently started going back out with her ex-boyfriend Keith Johnston.

Ms Lacey suggested that Mr Greene’s December interview was not reliable and not something the jury could safely act upon. In summary, she submitted that Mr Greene’s June interviews more accurately represented what had occurred on the night and there was sufficient evidence to find him guilty of murdering Mrs O’Connor.

Evidence has been given that Mr Greene walked into Rathfarnham Garda Station on June 12th, 2017 and told a detective that he had done “something terrible”.

The trial has heard that six months after he was charged with her murder, Mr Greene changed his account of killing and dismembering his partner’s mother. In the December interview, Mr Greene told interviewing detectives that Mrs O’Connor attacked him with a hurley. He said Mrs O’Connor’s husband, ‘Gus’ O’Connor, came into the bathroom after he fell to the ground and gave out to his wife saying: “What the f**k are you doing?” Mr Greene told detectives that Mr O’Connor had killed his wife using the crowbar and he [Mr Greene] had taken the blame.

Mr Johnston has pleaded not guilty to assisting Mr Greene in the purchase of various implements at Woodie’s, Mr Price, B&Q and Shoe Zone, Tallaght, Dublin 24 on June 9, 2017, which were to be used in the concealment of the remains of Mrs O’Connor.

Ms Lacey will continue her closing speech to the jury tomorrow.