Option of manslaughter ruled out by Dwyer at close of evidence 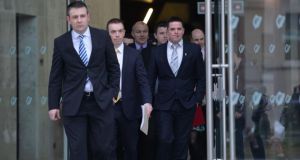 Dwyer (42) killed Ms O’Hara at Killakee Mountain, Rathfarnham, by stabbing her to death for his own sexual gratification on August 22nd, 2012.

Her remains were found on the mountain in September 2013, by a woman out walking her dog. Dwyer had lured Ms O’Hara to the shore near Shanganagh Park, in Shankill, south Co Dublin, before driving her to the mountain and murdering her.

The jury took just over 7½ hours to reach the unanimous verdict. Dwyer shook his head and reddened as the foreman delivered the verdict.

The 456-day case included evidence from 197 witnesses, only three of them for the defence.The prosecution had asserted Dwyer was “a sadistic and brutal pervert with nothing on his mind other than murder”. The defence had argued Ms O’Hara had taken her own life.

Putting an option of manslaughter to the jury was briefly considered at the close of evidence last week, but was ruled out by Dwyer.

Mr Justice Tony Hunt, told jurors he agreed with their guilty verdict “110 per cent”. They are to be offered counselling because of the graphic nature of the videos they have seen.

Dwyer will be held in Cloverhill Prison until after sentencing, which is due to take place on April 20th.

The Irish Times has learned Dwyer is suing the State for the manner in which gardaí accessed his telephone records.

He lodged documentation with the courts at the end of January and the State is fighting the case. The matter is based on a ruling last April by the European Court of Justice which found the EU data retention directive was invalid.

Legal sources said Dwyer would also appeal his conviction on the same basis and as well as on how he was questioned following arrest.

Dwyer has been considered by the Garda as a suspect for the 1999 stabbing murder of Raonaid Murray (17) in Glenageary, south Dublin, when he was also living in south Dublin.

He has also been examined as a suspect for the stabbing murder of 50-year-old Eugenia Bratis in the Phoenix Park, Dublin, in 2009. He referred to both women in text messages to Elaine O’Hara.

However, no evidence has emerged to link him to either murder.