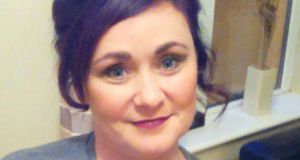 Brigid Maguire: Danny Keena said he had gone to her new home in the village that evening to discuss their son’s education, but they had argued. Photograph: Facebook

A Westmeath man charged with murdering the mother of his two children showed gardaí how he choked her following a row in her new home, a court has heard.

Danny Keena of Empor, Ballynacargy, Co Westmeath, is charged with the murder of 43-year-old Brigid Maguire by strangling her.

The 55-year-old farmer has pleaded not guilty to murder but guilty to her manslaughter at Main Street, Ballynacargy, on November 14th, 2015.

Sgt Brian Willoughby told the Central Criminal Court he had interviewed the accused a number of times following his arrest. The sergeant told John Hayden BL, prosecuting, that the accused had described his 25-year relationship with the deceased. She and their two children had left the family home at Empor a few weeks before she died.

Mr Keena had told him he had gone to her new home in the village that evening to discuss their son’s education, but they had argued. He said she told him he was no good to the children and that’s why they had moved.

“I said: ‘You’re some mother to them, whoring in around Mullingar.’ I was vexed at this stage,” he said. He followed her up to her bedroom.

“Next a text message came on the phone. I said: ‘That must be your f***ing partner in Mullingar. You must be going to meet him’,” he told gardaí.

He said she had told him it was none of his business and “she jumped out of the bed and came for me really violently. She was vexed,” he said. “She had her two hands out into my face. I put my two hands out to block her.”

He said his two hands were on her shoulders and he moved them on to her neck.

The sergeant said the accused had put his two hands around a garda’s neck to show him how he was holding her.

“What were you doing there?” he was asked.

“Choking her,” he replied.

He said he had not meant to kill her. “I didn’t go there to kill that night,” he said.

The trial continues before Mr Justice Patrick McCarthy and a jury.