Dublin man Jason O’Driscoll (36) sentenced to life in prison, tells judge the jury got it wrong 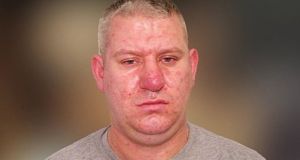 Jason O’Driscoll has been sentenced to life in prison for the murders of Anthony Burnett and Joseph Redmond in Co Louth in 2012.

The mother of a man killed in a double murder said her heart had been shattered into a million pieces on the day he was taken.

“He was my rock, my firstborn and my only son,” Marie Burnett wrote in a victim impact statement read to the Central Criminal Court on Tuesday at the sentence hearing of Jason O’Driscoll (36).

The jury had used circumstantial evidence to convict O’Driscoll of murdering Anthony Burnett (31) and Joseph Redmond (25) in Co Louth, where they had gone to sell him a stolen car on March 7th, 2012.

The two died of gunshot wounds to their heads before petrol was used to set fire to a black diesel Volkswagen Golf containing their bodies.

The deceased were both from Ballybough in Dublin’s north inner city and were described by the State as “small-time criminals” involved in car theft.

O’Driscollof Richmond Avenue, Fairview told a judge that the jury got it wrong as he was sentenced to life in prison for a double murder, following a trial that ended two months ago.

He was back before the court for his sentence hearing, at which Alex Owens SC, prosecuting, read out victim impact statements prepared by the victims’ mothers.

Ms Burnett, acknowledged her “loving, kind-hearted and caring” son had made some bad decisions in his life. However, she said he had paid the price for them and had spent his final years trying to improve himself.

She said she was not ready to say goodbye to him . “Not only was my son shot, but their bodies were burned so badly that we couldn’t even have an open coffin and say a proper goodbye,” she recalled.

“We were robbed of that by a callous, cold-hearted person.

“How he sleeps at night, I’ll never know. He not only killed our sons, but he killed a big part of us too. He has ruined so many lives and he has filled us with so much anger and hatred.”

At this point, O’Driscoll interjected and shouted that he was innocent.

Mr Redmond’s mother, Pauline Doran, wrote that her eldest son had been brutally murdered “for being in the wrong place at the wrong time”.

“My life will never return to normal after the total devastation,” she wrote. “There are days that I don’t feel able to get out of bed from utter emptiness at Joey’s loss.”

She said that no sentence imposed on the perpetrator would restore peace to her family.

“I will continue to mourn my son until the day I die,” she said.

Judge Michael White then said that the court had a duty to impose the mandatory life sentence. He said that the two men had been “executed in a callous, brutal way”.

He was interrupted by O’Driscoll saying “I’m innocent, your honour. The jury got it wrong,” he insisted.

Mr Justice White continued, noting that the two victims had received a “horrific death without justification”, being executed and burned. He said that no human beings deserved this.

He then imposed the mandatory life sentence on each count, backdated to June 2016 when O’Driscoll was taken into custody.