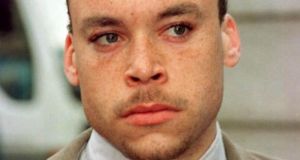 The jury in the trial of Mark Nash for the murder of Sylvia Shields and Mary Callanan in 1997 has resumed deliberations at the Central Criminal Court in Dublin. Photograph: Collins Courts

The jury in the trial of a man accused of murdering two women 18 years ago will continue its deliberations on Monday.

Five women and six men are deliberating in the trial of Mark Nash (42), who has last addresses at Prussia Street and Clonliffe Road in Dublin.

The trial has heard the two women were living in sheltered accommodation in a house attached to St Brendan’s Psychiatric Hospital in Grangegorman at the time.

After they were charged by Mr Justice Carroll Moran on Thursday, the jury of five women and six men spent nearly 40 minutes deliberating before being sent home until Friday morning.

The 11 members of the jury returned to court 17 for further deliberations at 11am on Friday morning. The judge re-charged the jury in relation to a number of matters on Friday afternoon.

Before they retired to the jury room at 11.05am to resume deliberations, the forewoman asked Mr Justice Moran if it would be possible to obtain a statement by Dean Lyons, the man first charged with the murder of one of the two women. The court heard during the trial that the charge was later withdrawn.

The judge told them that what they had to consider was only the matters put before them in evidence.

“Anything that was not part of the evidence cannot be presented to you,” the judge said.

The jury returned to the courtroom at 11.45am and the forewoman asked if they could see a video of the scene of the murders taken by gardaí. It has already been produced in evidence in the case.

The video was shown to the court and the jury after they returned from a short comfort break at 12.45pm. They retired for lunch at 1pm they resumed deliberating at 2pm.

On Friday afternoon, the judge recharged the jury on a number of matters, including on evidence given of the possibility of contamination of items examined for forensic evidence.

The judge said the issue for the jury was whether the prosecution had proved beyond reasonable doubt that there was not any risk of contamination in a room in which items of evidence were examined, or elsewhere, such as to undermine the contention of the State that the victims’ DNA was deposited on the accused’s jacket at the time of the murders.

“It’s common cause that there is always a risk of contamination in laboratories,” he said.

So the jury could not be asked to consider that there was no risk. The question they had to ask themselves was whether there was a risk that undermined the State’s case.

The judge said it was for the jury to decide whether they were consistent only with guilt and not with any rational hypothesis of the presumption of innocence.

He told the jury to look at these and to decide if they were satisfied beyond reasonable doubt. They could look at the “cumulative effect” of all the evidence to make a determination.

The judge said that on the involvement or not of Martin Stafford in the crimes, it was noted he had a history of violent behaviour and was in the area at the time. He had also assaulted a woman that night in an area contiguous to Grangegorman.

The prosecution said that nothing had been found to connect him with the crimes.

But if he had been involved, the prosecution contended, it would be expected that such evidence would have been found, the judge said.

Judge Moran also re-charged the jury on matters relating to the discovery of a boot print found at the scene of the crimes, which corresponded to a Caterpillar 9 boot. A similar boot had been found in Mr Nash’s room.

The judge noted one witness had thought it very unlikely that the wear on the boots over the period of time between the murders and when they were found could have resulted if the boots had been in normal use.

It was the prosecution case that there was evidence that Mr Nash bought the boots some time before the time of murders.

It was for the jury to decide whether the evidence in relation to the boots was only consistent with guilt and inconsistent with any reasonable hypothesis as to his innocence.

The judge also told the jury the prosecution had stated there was no other DNA found on the jacket belonging to the accused other than the DNA of the two victims.

The had, however, also been a mixed DNA profile of three people on the jacket, which the defence contended was possible contamination.

Before they returned to the jury room at 2.45pm to resume their deliberations, the judge told the jury that they were now “in control of everything”.

They were in control of the timetable for the case. The court would sit at the times they wanted and on the days they wanted. If they wished to consider matters a bit longer on Friday, they could do so.

He said they could return at 4pm and tell him what they wanted to do.

“I don’t want you to rush matters,” he said.

The jury returned at 4pm and told the judge they would sit at 11am on Monday. The court was adjourned to that time.

After a trial lasting 48 days, Mr Justice Moran addressed the jury on Thursday on the law and the legal principles that apply in this case.

Mr Justice Moran told the jury members the murder was based on three things, the admissions made by the accused, the print of the caterpillar boot found in bedroom number one of Orchard View and finally the scientific evidence and DNA.

He said to the court there was a mention in the case of two people killed in Ballintubber in Roscommon and a Sarah Jane Doyle injured, and this was raised to give the context between the gardaí and the accused being in Galway in mid August in 1997.

“Those matters in Ballintubber would not normally have been mentioned as they are of no probative value in assessing values in this account. You must not take this into account in assessing the accused,” he added.

The court heard there are two counts against the accused which require two separate verdicts.

“You could bring in different verdicts on two counts and I don’t want to trespass into your deliberations, but in reality there should only be one verdict on the two counts.

“The evidence has been that the same man probably committed the two murders and the similarity of injuries with the cutting of throats and genital mutilation. It is most likely that the same person committed both murders, but whether it was the accused is a separate matter,” he added.

“Please come back in the course of your deliberations and ask me to elaborate and mention any matter I have left out, no matter how trivial it seems to you to be,” he concluded.

Mr Justice Carroll Moran then touched upon the salient points in the case of the prosecution and the defence, including the two big issues in the case, the admissions and the DNA evidence.

He put it to the jury: “You are chosen at random from the electorate list, you come from all walks of life, different backgrounds, are of both sexes and that’s deliberate and the theory is you all bring all of your experience of life and put it into the one pot, out of which will come the correct verdict.”

“You have to put all such sympathies aside and look at matters as calculating and dispassionately as you can. You have to be unanimous, all 11 of you have to agree on your verdict,” he concluded.

He finally asked the jury to take their time and told them there was no hurry for a verdict before the jury retired at 2.22pm for less than 40 minutes.