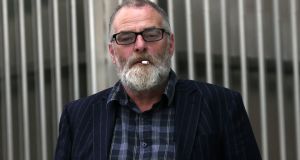 The victim of the attack Simon Burke outside the Central Criminal Court. Following the attack doctors were unable to remove parts of the knife from Mr Burke’s head. Photograph: Collins Courts.

A man with paranoid schizophrenia went to a psychiatric unit but didn’t get to see anyone hours before he stabbed a stranger in the head with a knife.

The accused, Gerard Dowling, told gardaí that on the morning of the assault he went to the Department of Psychiatry (DOP) in St Luke’s Hospital, Kilkenny, because he was feeling paranoid and hearing voices. When he went there he said he didn’t get to talk to anyone. “They seemed busy,” he added.

Garda Paul Coleman told Mr Vaughan Buckley that he arrested the accused following the stabbing and interviewed him later that day at Kilkenny Garda Station.

In the first of four interviews Mr Dowling told gardaí that after leaving St Luke’s he “took it out on a man” in the city centre, explaining that he attacked a man using a knife he had bought some weeks earlier. He said he didn’t know Mr Burke and that Mr Burke had done nothing to him. He told gardaí that he had stopped taking his medication the previous January and sometimes heard voices in his head.

Simon Burke told the jury that he and his partner Margaret O’Brien went to Kilkenny city that day to walk their dog, an American Akita, along the canal. Afterwards they had lunch at the Yard Cafe where Mr Burke said he thinks he remembers first seeing Gerard Dowling. After lunch Mr Burke and his partner walked towards Market Cross Shopping Centre to get some repairs done on his phone but they noticed a man, Mr Dowling, following them. Mr Burke looked back several times and when he and Ms O’Brien stopped to look in a shoe shop window Mr Dowling stopped too.

They walked on and as they entered the shopping centre Mr Dowling got “quite close” so Mr Burke turned to him and asked “are you alright, or can I help you?”

“He took the knife straight out and launched straight into it,” Mr Burke told Mr Vaughan Buckley.

“He lashed a blow into my shoulder and thereafter he rained down blows on my head.” He said he was struck with “great force” and it felt like a hammer or a rock was hitting him. He fell to the ground while Ms O’Brien tried to fight off his attacker.

Following the attack doctors were unable to remove parts of the knife from his head. They remain there as doctors feared that removing the metal would be more dangerous than leaving it where it is. He also suffered a broken finger.

Margaret O’Brien told Mr Vaughan Buckley that she thought the attacker wanted to kill her partner.

Ms O’Brien screamed and tried to knock the knife out of the attacker’s hand with her handbag and a newspaper she was carrying.

The witness grew tearful as she said: “I knew he wanted to kill him. I could see it. I knew if he stabbed him one more time he would be dead.”

The knife was found near to where the attack took place and Mr Dowling told gardaí during interviews that he dropped it after “the lady swung the bag”.

Store security, two nurses and a paramedic who were nearby helped to stop the blood and keep Mr Burke awake before he was taken to hospital by ambulance.

When gardaí asked Mr Dowling if he was trying to kill Mr Burke he replied: “It’s hard to know. It depends who that man is and if I go to kill him. I don’t have the answers.”

He said he had never done anything like that before and wasn’t carrying the knife as an offensive weapon. He added that due to his condition it’s hard to know what he was trying to do. “It’s like split personality,” he said.

When gardaí asked him if he ever thought about injuring people he told them: “It feels like it’s not me thinking it. It’s people giving me the thoughts.”

The trial, which began on Monday in front of Justice Paul McDermott and a jury of six men and six women, continues.

On Monday Mr Vaughan Buckley told the jury that forensic psychiatrists for the prosecution and defence assessed Mr Dowling and agreed that he was suffering from a mental illness at the time of the alleged assault and fits the criteria for a verdict of not guilty by reason of insanity.

He said they would hear from lengthy reports detailing the accused man’s mental health problems going back to 1998.