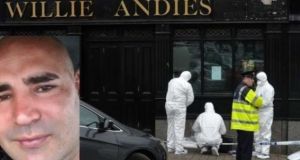 A 28-year-old man has gone on trial accused of the murder of a father of four who was beaten to death in a “vicious assault’ in a pub in Co Cork.

The court heard seven of the victim’s teeth were knocked out in the attack.

Michael Dineen of Ard Mhuileann, Ballywillan, Mitchelstown, Co Cork has pleaded not guilty to murder but guilty of the manslaughter of Patrick ‘Ginty’ O’Donnell. The prosecution alleges that Mr Dineen murdered Mr O’Donnell (36) at Willie Andies Bar on New Square in Mitchelstown on the night of June 1st, 2018.

Opening the state’s case at the Central Criminal Court sitting in Cork , prosecution counsel, Tim O’Leary SC said the jury would hear evidence that after Mr Dineen left the bar, he walked through the town and shouted: “I am the King of Mitchelstown”.

Mr O’Leary said the deceased was drinking in Willie Andies from noon that day and the accused was there from later in the afternoon. The two men were known to each other and not unfriendly, he said.

“Something seemed to happen after around 10pm when an altercation occurred between the two – the prosecution alleges the deceased is pulled down on to the ground by the defendant and a vicious assault takes place,” he said.

“That assault leads to the death of Mr O’Donnell and it happens on the pub floor. There were seven teeth knocked out of Mr O’Donnell, two of which end up in internal parts of his body – one in his thorax, one in his airways.

He said it is alleged the assault continued, despite efforts by staff and others to break it up, even after Mr O’Donnell had become unresponsive.

Mr O’Leary told the jury of six men and six women it was for the prosecution to convince them that Mr Dineen had an intention to either murder or cause serious harm to Mr O’Donnell.

Earlier, defence counsel Brendan Grehan SC said it was originally envisaged the case would take three weeks but Mr Dineen’s guilty plea to manslaughter had “narrowed the issues” and the trial should last no more than two weeks.

He said that Mr Dineen had accepted a number of aspects in relation the State’s case, including that there were no issues over his arrest and detention which were carried out properly as was the preservation of the scene.

Mr Dineen was similarly conceding there were no issues with the continuity and presentation of exhibits or with the harvesting of “a substantial amount of CCTV” and the checking of the times depicted on the CCTV, he said.

“Finally, it is admitted he unlawfully killed Patrick O’Donnell so that will not be an issue – in so far as there are issues in the case, they will revolve around issues of intent and provocation,” he said.

The trial continues on Tuesday.