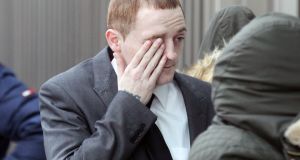 James Connors (29), of Rosemount, Drinagh, Co Wexford, has pleaded not guilty to the murder of James Ryan (27) at Hollyville Heights in Wexford town on January 25th, 2012. Photograph: Collins Courts.

A witness has described seeing a man being hit with a baton in the lead-up to a fatal stabbing that left one man dead, a murder trial heard on Wednesday.

James Connors (29), of Rosemount, Drinagh, Co Wexford, has pleaded not guilty to the murder of James Ryan (27) at Hollyville Heights in Wexford town on January 25th, 2012.

At the Central Criminal Court, Catriona Purdy, a former neighbour of Mr Ryan, said she woke shortly after midnight on the night in question after hearing a loud bang.

She told prosecution counsel Gerard Clarke SC that she looked out the window and saw two men.

“I saw a tall, well built guy standing there,” she said. “He was waving a baton.” Ms Purdy told defence counsel Michael Delaney SC that a statement she gave to gardaí the day after the incident was accurate.

“The bigger of the two was hitting the smaller man with a baton,” she said in the statement.

Neighbours John Purdy and Tina Grogan, who were also woken by a loud bang, told the jury they saw two men outside fighting.

Both witnesses told Mr Clarke the fight moved up a ramp to an area where they could not see and within about one minute the taller of the two men returned.

Ms Purdy said that he was holding his side and limping.

The court heard from Dr Karl Schmidt, a consultant surgeon at Wexford General Hospital. Dr Schmidt operated on Mr Ryan in the early hours of January 25th but was unable to save his life.

He told the court he saw five stab wounds, one to the shoulder and four to the abdomen. He said Mr Ryan had lost a lot of blood and his blood pressure was dangerously low.

His condition was so poor that he was sent immediately to the operating theatre. Some 1.8 litres of blood was drained from Mr Ryan’s chest and more than two litres from his abdomen, he said.

The trial continues in front of Justice Margaret Heneghan.