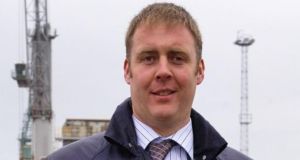 The man accused of the capital murder of Detective Garda Adrian Donohoe was on bail and under curfew at the time of the fatal shooting, the Central Criminal Court has heard.

Aaron Brady (29) went to a Garda station 11 days after the shooting and gave a voluntary statement in which he said he was before the Circuit Court on charges of criminal damage and dangerous driving. In the lengthy statement he detailed his background and gave an account of his movements in the days leading up to Det Gda Donohoe’s death.

Mr Brady from New Road, Crossmaglen, Co Armagh has pleaded not guilty to the capital murder of Det Gda Donohoe (41) who was then a member of An Garda Síochána on active duty on January 25th, 2013 at Lordship Credit Union, Bellurgan, Co Louth. Mr Brady has also pleaded not guilty to a charge of robbing approximately €7,000 in cash and assorted cheques on the same date and at the same location.

Inspector Mark Phillips of the Garda National Bureau of Criminal Investigation told prosecution counsel Brendan Grehan SC that Mr Brady came to Dundalk Garda Station on February 5th, 2013 to make a voluntary statement. Insp Phillips said he advised Mr Brady that gardaí would listen to what he had to say and document it in writing. They also told him they would not question him and he was free to leave and was not under arrest. At that stage Insp Phillips said Mr Brady was not a suspect. The accused was accompanied by his solicitor and made what Insp Phillips described as a “lengthy statement”.

The witness agreed that Mr Brady started out by telling gardaí that he was currently “in court” for criminal damage and dangerous driving and as a result he had a curfew. He was on bail, he said, and was trying to save money to pay off the damage. Detailing his family background he said his father was chairman of Crossmaglen Rangers and his mother’s name is Caroline. He said he played as a forward for Crossmaglen.

When he was 16 he finished school having done his O-Levels and worked as an electrician from age 18 to 19. He did an apprenticeship and later did a FAS course in Sligo for six months and then went to Australia for four months. When he was 19 he went to Boston in the US. He told gardaí: “I loved America but I couldn’t work illegally.” When his grandmother got sick he came home and worked for a time for his father until the business “went a bit downhill”.

He said he has a metal plate in his right hand following an injury he suffered during a football game. He said he has “no power when I squeeze my right hand,” which he described as his dominant hand. He would struggle, he said, to lift 20 to 30 kilograms with that hand.

He had been on the dole for a time getting £45 (€54) per week and he was living off a £4,000 (€4,800) claim he made following an accident in which someone drove into the back of a car in which he was a passenger. For the previous four to five weeks he had been looking for work “harder than ever coming up to Valentine’s Day”. He got work through a friend for a firm in Santry, Dublin and was hoping for more shifts over the coming week.

Detailing his movements in the days leading up to the murder of Det Gda Donohoe he said he had spent the Wednesday with a friend, who cannot be named for legal reasons. They planned to go driving quad bikes but one of them needed repairs and so they stayed at his friend’s house playing Playstation games. On the Thursday evening Mr Brady said his girlfriend went to a nightclub in Dundalk while he stayed with his friend watching the Tom Hardy film Lawless. At about 2am he and his friend went to Dundalk to collect their girlfriends but Mr Brady had an argument with his girlfriend because she was wearing a “fella’s American-style cap when she came out of the disco”. They continued the argument by text until the next morning. He said: “She was saying she was all on for breaking up and I was sorry for overreacting.”

The following evening Det Gda Donohoe was shot dead. Mr Brady said he woke up that afternoon in his friend’s house at about noon and at about 1pm they took his friend’s BMW and collected another friend from his house on the Armagh Road in Tullydonnell, Co Armagh. He detailed the route they took, stopping to eat at a petrol station along the way before pulling into a closed petrol station in Cullaville, Co Armagh where they tried to decide what to do for the day. It was about 2 to 2.30pm. The statement evidence will continue on Tuesday.

Donald Whiteside earlier told Lorcan Staines SC for the prosecution that he works as a wildlife ranger covering areas in Armagh, Antrim, Down and Derry. On Saturday January 26th, 2013, one day after the shooting at Lordship, he saw a burned out car on Cumsons Road in south Armagh. The driver’s side tyres were still smouldering and the bonnet was “lukewarm” when he touched it. It was “completely burned out” and he could not tell what colour it was. He noted that it was a saloon and thought by the shape that it was a Volkswagen Passat, although he could not be sure.

The witness told gardaí at the time that it was normal to find burned out cars in that general area. He notified the forester on the Monday, two days after he saw the car.

The trial continues in front of Mr Justice Michael White and a jury of eight men and seven women.