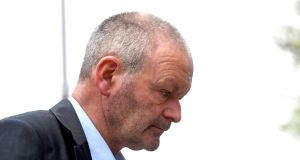 Michael Ferris has been found not guilty of murder but guilty of the manslaughter of a neighbouring farmer in Co Kerry. Photograph: Domnick Walsh

A Co Kerry farmer is to be sentenced next month for the manslaughter of a neighbouring landowner.

Michael Ferris (63), of Rattoo, Ballyduff, had pleaded not guilty to a charge of murdering tillage farmer John Anthony O’Mahony (73), of Ardoughter, on April 4th, 2017.

The jury at the Central Criminal Court in Tralee was told 10 minutes before they delivered the verdict that they could bring in a majority verdict. Their decision was reached by a majority of 10 to two after more than 4½ hours of deliberation. Ms Justice Carmel Stewart said it had not been an easy trial and the panel would be excused from jury duty for 10 years.

The prosecution had argued that the killing had been deliberate and intentional and it was murder. However, the defence said there had been accumulated provocation because of the behaviour of the dead man.

It was the prosecution’s case that Ferris “intentionally rammed” Mr O’Mahony’s car with the large prongs of a teleporter on a country road.

The incident caused severe damage to the car and “catastrophic injuries” to Mr O’Mahony resulting in his death.

Ferris told gardaí he drove the forks of his teleporter through the car because there was no other way to stop Mr O’Mahony using a loud crow banger. He told gardaí after his arrest that the banger, a device used to scare away birds, would wake the dead and had been an issue for 30 years.

“Surely there was some other way to get around it,” Det Sgt John Heaslip asked Mr Ferris during the interview at Listowel Garda station.

“Believe me there wasn’t,” he replied.

Pressed in a later interview on why it was he set out to take action that morning, Mr Ferris said his neighbour had to be stopped.

“Are you saying you intended to kill him,” he was asked.

Mr Ferris replied that he did, adding “he had to be stopped and that was it”.

The jury was told by the defence on Thursday that “the just verdict” would be manslaughter with Brendan Grehan SC saying the community was being oppressed by the deceased and living in fear of a totally unreasonable person.

Mr Grehan said he rejected the prosecution claim that the killing was intentional. There was provocation and there was an accumulation of different matters over the years, which led his client to snap, Mr Grehan said.

“We are all capable of losing it or getting excited. With some of us, it builds up slowly,” Mr Grehan said.

Prosecution counsel Patrick McGrath told the jury the actions of Ferris were not consistent with a sudden loss of self-control, or acting in a fury. He had been thinking about it for a number of days, the jury was told.

He referred to the interviews with detectives in which Mr Ferris agreed he had set out that morning to kill Mr O’Mahony and that he drove the forks in through the car window. Asked if he had set out to kill him, the accused had said: “Well if I didn’t kill him, I would have seriously injured him anyway.”

Ferris had never suffered from mental health problems; he had not acted under a sudden loss of control, Mr McGrath also said.

Ferris will be sentenced at the Central Criminal Court in Dublin on November 26th.