Oliver Kierans has pleaded not guilty to murdering his wife 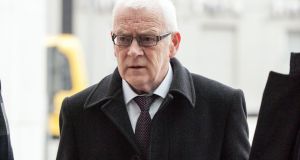 The jury in the trial of a Cavan man accused of murdering his wife have been sent home and will resume their deliberations on Friday.

Oliver Kierans (57) of Drumbannon Bailieborough in Cavan has pleaded not guilty to murdering Patricia Kierans (54) on September 5th, 2013 at the same address.

He pleaded not guilty to unlawful possession of a 12 gauge double barrel shotgun but was found guilty of that charge on Wednesday by the jury.

He also pleaded not guilty to the possession of the same shotgun with intent to endanger life.

Early on Thursday Ms Justice Aileen Donnelly asked the jury of five women and seven men for a majority verdict on the charge of murder and the possession of a shotgun with intent to endanger life.

The jury will resume their deliberations on Friday morning.