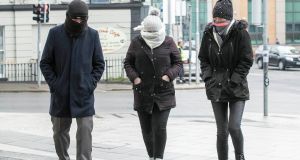 A handyman who had started redecorating a bathroom where a grandmother was allegedly murdered told gardaí that he knew “it looks bad but that’s just the way it is”.

Keith Johnston, the ex-partner of the late Patricia O’Connor’s daughter Louise O’Connor, also told detectives that he was trying to do a good thing for the family by doing the work.

Louise O’Connor (41) and her daughter Stephanie O’Connor (22), of Millmount Court, Dundrum Road, Dublin 14, and Mr Johnston (43), of Avonbeg Gardens, Tallaght, Dublin 24 are all charged with impeding the apprehension or prosecution of Kieran Greene, knowing or believing him to have committed the murder of Patricia O’Connor (61) on May 29th, 2017.

Mr Greene (34) has pleaded not guilty to murdering Patricia O’Connor at her home in Mountainview Park, Rathfarnham, on May 29th, 2017.

The jury on Wednesday listened to two interviews gardaí held with Mr Johnston on September 26th, 2017. Mr Johnston is the father to two of Louise O’Connor’s five children.

The court has heard that Patricia O’Connor’s body was dismembered into 15 separate parts that were found at nine different locations over a 30km stretch in the Dublin and Wicklow mountains between June 10th and 14th, 2017.

It is the prosecution’s case that Patricia O’Connor was already lying dead in a shallow grave in Wexford but not yet dismembered when Mr Johnston assisted Mr Greene in purchasing various DIY items.

It is also the State’s contention that Mr Johnston redecorated the bathroom at Mountainview Park in order to destroy or conceal any evidence relating to the alleged murder.

The Central Criminal Court trial has heard that while in custody, Mr Greene changed his account of killing and dismembering his partner’s mother, six months after he was charged with her murder.

He claimed in his last interview in December 2017 that Mr Johnston “made a plan” and cut up Mrs O’Connor’s body parts beside a shallow grave in Wexford before directing him up the Wicklow mountains, where they both disposed of her remains.

Det Garda David Connolly gave evidence that he told Mr Johnston at the time of his first interview that he had not been arrested for the murder of Patricia O’Connor but that gardai were trying to find out the truth.

Mr Johnston told them that Patricia O’Connor used to give out and “did not suffer fools”. She gave them all “a bit of stick” but had a “special kind of giving out” for Mr Greene, he claimed.

Mr Johnston said he and his two children had planned to move out of Dublin and rent a three-bed house in Carlow before the incident as there were too many arguments in the O’Connor home at Mountainview. He said he visited the house up to three times a week and could sense the tension.

Mr Johnston said he noticed a piece of wood had gone wet and soft in the bathroom at Mountainview on the day he found out Patricia O’Connor was missing and helped to fix the step over the next few days.

“We grouted the floor tiles but didn’t get to finish it,” he said.

Mr Johnston said he was in Mountainview on June 12th, 2017, when Mr Greene started to cry and told his family that he had killed Patricia O’Connor.

He agreed he had said in his statement that he could have been clearing up a crime scene when he was doing the grouting in the bathroom but regretted saying this.

He denied taking the bathroom apart and maintained that the shower step had been broken for the last year.

“I know it looks bad but that is just the way it is.”

He maintained it was not the first thing he did in the house, telling gardaí: “So don’t start saying I did that one thing to make it look like I was up to something as that is not the case.”

The accused man said he did not talk to Mr Greene about what had happened to Patricia O’Connor. He described what Mr Greene did to the retired hospital worker as “horrible” and “sickening”.

Mr Johnston said he did not know what day he did the tiling. He explained he went to get “a few bits” with Mr Greene on two occasions and said these items included plywood, tiles and grout.

At the end of his first interview, Mr Johnston said he did not re-grout any of the floor tiles in the bathroom.

Asked by interviewing detectives in his second interview how long “the job” took, he said it was done over a few days as they had to do a bit and leave it to dry.

He told gardaí he had noticed the shower step on June 1st and had started fixing things because he thought Patricia O’Connor would be back with an eviction notice.

Mr Johnston said he was watching the Dublin match on June 10th, when he saw on the 1pm news that body parts had been found in the mountains. Mr Greene collected him and brought him to Mountainview two days later, he said, adding that Mr Greene confessed to his family what he had done that day.

“I said to him he was going to have to hand himself in. What else he going to do, he couldn’t go on the run,” he said.

The accused man denied to gardaí that he was with Mr Greene when Mrs O’Connor was buried.

Earlier, Stephanie O’Connor, granddaughter of Patricia O’Connor, who has pleaded not guilty to disguising herself as her grandmother at Mountainview Park, Rathfarnham, in order to conceal the fact that her gradnmother was dead, gave evidence.

It is the prosecution’s case that at no point in time in CCTV footage can Stephanie O’Connor be seen as herself leaving Mountainview Park on the night of May 29th, 2017 and that in order to cover up the alleged murder she dressed up as her grandmother as “a ruse” to pretend that she had stormed out of the house carrying a suitcase. It is the State’s contention that Patricia O’Connor was already dead in the house at the time.

Geraldine Small BL, for the State, read from a transcript of a garda interview with Stephanie O’Connor on September 2nd, 2017. It was the third interview after her arrest.

During the interview, Stephanie O’Connor was shown video clips from CCTV footage caught on a camera facing the back of Patricia O’Connor’s neighbour’s home in Mountainview Park at 10.06pm on the night of May 29th, 2017.

The jury heard that as the CCTV clip was replayed for Stephanie O’Connor, she told gardaí: “I think it’s me closing the door. I think. I’m still not totally sure it’s me.”

The clip was then replayed again and gardaí zoomed in on the person caught on the footage. When asked what colour hair the person had, Stephanie O’Connor said: “It looks light but that’s [the footage] black and white.”

She then replied “me and Nana” when she was asked who had light coloured hair in the house at Mountainview Park.

When she was asked if the person was her grandmother, Stephanie O’Connor said that Patricia O’Connor had “apparently” left at that point.

“It could be me but I don’t remember, it was ages ago,” she added.

Gardaí then played a clip from 10.05pm and zoomed in on the footage where the person is seen.

Gardaí then asked her to tell them what she was doing. “Going inside,” she replied.

Asked where she was coming from, Ms O’Connor said: “I’m coming from around the shed.”

She went on to say she could not remember how she got out to the shed. She said she was bringing in a bag from the shed for her mother.

Asked if that was all her mother asked her to do, Stephanie O’Connor said: “I don’t remember.”

Asked to describe the bag, she said: “It was a suitcase style bag, I brought it in and went to bed.”

In a separate interview at Wicklow Garda station on September 3rd, 2017, Stephanie O’Connor replied “no” when asked if she killed her nanny Patricia O’Connor.

The court heard she also replied “no” when she was asked if she assisted anyone in killing Patricia O’Connor.