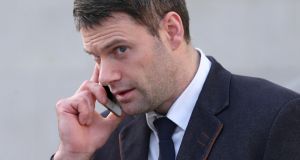 Michael Prendergast leaving the Court of Appeal in Dublin after winning his appeal against the severity of his sentence for assault causing harm to Jonathan Clarke during a football match on Davitt GAA grounds, Ballindine, Co Mayo on September 14th, 2013. Photograph: Collins Courts.

A GAA player jailed for assaulting an opponent during a match between two Mayo football clubs, has walked free from prison following a successful appeal.

He was sentenced to two years imprisonment with the final 12 months suspended by Judge Rory McCabe on October 16th last.

Prendergast successfully appealed his sentence on grounds that the sentencing judge operated on the injured party’s version of events rather than the referee’s match report.

In his victim impact report, Mr Clarke stated that his team, Davitt’s GAA Club “were losing the game” and were “playing for pride” at that point in the match.

Mr Clarke said his team were attacking and Bohola Moy Davitt’s, Prendergast’s team, were defending when he was fouled while going to retrieve the ball.

He said Prendergast came towards him and without warning punched him in the left eye. The assault was so severe, Mr Clarke said, he landed on the ground.

Clarke sustained a ruptured eyeball and detached retina which resulted in three surgeries to his eye. The court heard that he has lost 95 per cent of the sight in his eye.

Mr Clarke had stated that he considers himseld disabled and will “never be the same again”. He said Prendergast had “no reason to have any bother ” with him. “He had not been marking me” and “I can’t understand why he decided to attack me”. It was “entirely unprovoked,” he said.

Mr Justice Sheehan said the referee’s match report gave a “decidedly different account of the context of the assault”.

He said the referee recalled the incident occuring as a result of both men “fighting and tackling for the ball” and that Prendergast “just swung out and struck Jonathan Clarke in the face” before Mr Clarke “fell to the ground”.

While neither account in any way justified what happened, Mr Justice Sheehan said the referee’s report impacted Prendergast’s level of culpability.

There was “considerable difference” between an unprovoked attack off the ball and the account given by the referee, the judge said.

It seemed the sentencing judge proceeded on the version of events given by the injured party, Mr Justice Sheehan said, and this was exemplified by his remark that “what happened on the pitch that day was no different in principle to a street assault at night”.

He ought to have sentenced Prendergast on the basis of the referee’s report being the proper context of the assault in this case, Mr Justice Sheehan said.

Given that the court held that this amounted to an error in principle, it was not necessary for the court to consider other grounds of appeal, he said.

The court suspended the balance of that sentence on condiction he agreed to undertake 100 hours of community service.

He was required to enter into his own bond of €100 to keep the peace and be of good behaviour for 12 months and to undertake to do 100 hours of community service.