Dale Creighton trial: ‘If I had known he was in such a state . . . I wouldn’t put a finger on him’ 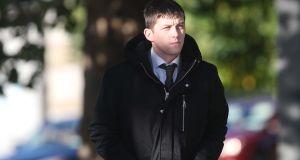 A man charged in relation to the death of Dale Creighton in Tallaght, Co Dublin has said if he had known the victim was “in such a state”, he would not have “put a finger on him”.

The trial of seven Dubliners charged with murdering a man, who was beaten to death, heard on Monday that another man seen punching and kicking him repeatedly was charged with assault causing harm.

A garda confirmed that James O’Brien was charged with the lesser offence. He was being cross-examined by a barrister for one of the accused, Jason Beresford, who identified himself kicking the deceased in the head on CCTV footage.

Dale Creighton was assaulted on New Year’s morning in 2014 at the footbridge over the Tallaght bypass between Saint Dominic’s Road and Greenhills Road. The 20-year-old Tallaght native died in hospital the following day.

A woman and six men, who are in their 20s and from Tallaght, have all pleaded not guilty to murder and went on trial at the Central Criminal Court last week.

Garda David Morris testified on Monday that he arrested Mr Beresford at his home at Avonbeg Gardens in Tallaght on January 4th, 2014. He and colleagues interviewed him a number of times and showed him CCTV footage of the assault.

He said Mr Beresford first denied any involvement in the assault, insisting that he had been home playing Playstation and watching films. However, gardaí then informed him that officers were on their way to speak to his mother and asked if she would prove he was lying.

“Yeah, it’s all a lie,” he said, admitting he had been out that night, but still denying being at the footbridge.

He later admitted more of his involvement.

“I walked through Westpark on the way home and stumbled across Aisling Burke full of muck, face pure red and I asked what happened,” he said.

He said he was told that she had been robbed and had her handbag stolen.

“She said she was on her own, that two or three lads approached her, dragged her down, kicked her and stole her phone,” he recalled.

He said she told him that “all the boys” were “gone chasing the lads”.

He said he met the others at the footbridge and was told: “This is one of the fellas, who mugged Asho.”

“By the time I got to the top of the stairs, the fella was already on the ground. People were shouting at him: ‘Where’s the phone? Where’s the bag?’ He wasn’t responding so I asked him. He wouldn’t respond so I hit him once or twice and then, since we couldn’t get it out of him, we left him there.”

He said he hadn’t seen the full extent of what had happened.

He said he had never seen Dale Creighton before in his life.

He was asked if he would agree that they went over the top.

“To be honest, as I already said, I didn’t see the full incident. I didn’t know how badly beaten he was,” he replied. “If I had known he was in such a state – he was still talking the time I got there – I wouldn’t put a finger on him.”

He was then asked if he wanted to see the CCTV footage again.

“I know what you’re going to ask me. I don’t need to see it again,” he replied.

It was put to him that it showed him kicking Mr Creighton in the head while he was being held up.

It was put to him that he then went around his back and punched him in the stomach.

“I was stupidly drunk and furious striking him,” he said, denying stamping on him. “I picked him up and dragged him down the steps, which I said was completely out of order, so I pulled him up again.

“I’m gutted. It was a stupid little incident, that turned out wrong. As much guilt as I have on my shoulders now for the rest of my life, it’s not worth taking anybody else’s life. I’m terribly sorry for my family as well, for both families.”

Under cross examination by Mícheál O’Higgins SC defending, Garda Morris agreed that he had shown remorse in the final interview. “He broke down,” he said.

The garda agreed his client had arrived on the scene after the footage showed a man arriving in a car, getting out and giving Mr Creighton nine punches and kicks.

He agreed this man was James O’Brien and that he had been charged with assault causing harm.

Ms Justice Deirdre Murphy told the six men and six women of the jury that a legal issue had now arisen.

This had to be dealt with in their absence and she asked them to return to court on Wednesday.