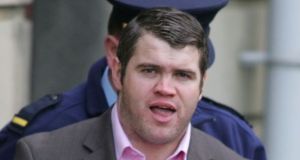 Brian Rattigan of Cooley Road, Drimnagh, Dublin, who has pleaded guilty to the manslaughter of Declan Gavin in 2001. Photograph: Collins Courts

Brian Rattigan has pleaded guilty to the manslaughter of Declan Gavin and said he is sorry to the victim’s family and anyone else he has hurt.

Rattigan’s plea was accepted by the State and he remains in custody as he awaits a sentence hearing on December 20th when Mr Gavin’s family will have a chance to tell the court of the impact his death has had on them.

Mr Gavin was stabbed to death outside an Abrakebabra on Crumlin Road on August 25th, 2001.

Rattigan (39) went on trial for his murder and was convicted in 2009 but that conviction was successfully appealed last year.

When arraigned on Monday on the same murder charge Rattigan, sporting a trimmed beard and glasses, replied: “Not guilty to murder, guilty of manslaughter.”

Pauline Walley SC for the Director of Public Prosecutions said the plea was acceptable.

Brendan Grehan SC, on behalf of Rattigan, said his client wished to say: “he is sorry to the Gavin family and anyone else hurt by his actions”.

Justice Michael White told Mr Gavin’s family that they will have a chance to speak of the effect the killing has had on them when the sentence hearing takes place on December 20th.