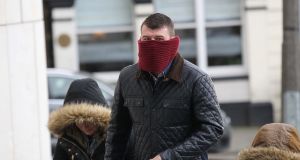 The alleged victims of an aggravated burglary have described how they were assaulted with a slash hook after they were woken by a group of men breaking into the house.

Edward O’Reilly told Dublin Circuit Criminal Court that his nephew, the accused Edward Charles O’Reilly (29), hit him in the head twice with a slash hook.

Michael McDonagh said the accused gave him a “rap” on the head with the sickle while another male hit him on the back of the legs with an iron bar.

Edward Charles O’Reilly of Wheatfield Grove, Clondalkin, Dublin has pleaded not guilty to committing the burglary at Deansrath Avenue, Clondalkin on May 11th, 2013.

The complainant Mr O’Reilly said that he, his sister and Mr McDonagh had all fallen asleep in the same bed after a night of drinking and listening to music.

He told Sinead McMullan BL, prosecuting, he woke up in the early hours of the morning and heard the front door being kicked in.

He said about four people, including the accused, entered the room. He said he was hit on the head twice with the slash hook before going unconscious.

The witness agreed with Padraig Dwyer SC, defending, that he was not supposed to have been drinking alcohol as he had been on a strong dose of methadone at the time.

He accepted he had been drunk when gardaí arrived on the scene and his memory of the event was “pretty poor”.

He told Mr Dwyer he was not aware an emergency services call had been made from the house hours earlier.

Mr McDonagh told Ms McMullan he fell asleep in the bed with his wife and Mr O’Reilly after consuming up to 10 litres of cider that day.

He said the accused Mr O’Reilly hit him on the head with a slash hook, while another male struck him twice with an iron bar.

He told the court the three men left after the attack and he later received stitches in hospital for his wounds.

In his cross examination, Mr Dwyer played three emergency service call recordings made in the early hours of May 11th, 2013.

Mr McDonagh denied the male voice in the first recording was his and further denied the woman identifying herself as Sarah O’Reilly in the second call was his wife.

In this recording, the jury heard the woman report that a man had been “nearly stabbed to death”, that there were children on the premises and there would be more “trouble”.

Mr McDonagh said the person on the phone had been “trying to make a laugh of the police”. He identified the female voice in the final emergency service call after 8am as that of his sister-in-law.

Mr Dwyer suggested to him his client had not taken part in an assault and had arrived on the scene after the attack to take another male away. Mr McDonagh denied this but accepted he was extremely intoxicated at the time.

The trial continues before Judge Karen O’Connor and a jury of eight women and four men.